The following article was posted some time ago on paneristi.com, the hive of Panerai enthusiasts.

My report caused serious grief and discomfort among senior Paneristi and some even felt personally attacked by it. Soon a lynch mob was sent out to throw stones in an attempt to discredit me with various accusations, lacking of any substance.

Volker Wiegmann, a German Vintage Panerai expert and author, felt obliged to post a statement in which he basically confirmed everything I had reported in my post. Of course, he and his partner, the ex-owner of the 6154, had approved and published this watch many years before. It turned out they knew about the Antiquorum auction since September 2012.

I contacted Mr. Wiegmann with my findings many months prior to my post and shared all the available data with him. The bottom line of his short answer was more or less: If you wanna know more about the ongoing research buy our new book!

Mr. Ferretti joined the discussion too, confirming my findings and – truly a gentleman – offering to get in touch. He had sold this watch in 2003 to a spanish collector.

However, for some Paneristi this was an overkill and they wanted me to leave the forum. Unable to prove anything contrary to what I had reported, they finally made up the absurd story of a vicious puppeteer, who was remote-controlling me to ridicule certain members of the Paneristi in public. It was interesting to see how everything about Vintage Panerai is somehow based on myths and fiction…

An old forum post from September 2012 was brought into attention to insinuate, that in reality I was a Taiwanese collector. The post was indeed very interesting but ultimately backfired on them, as it clearly stated that the watch in question had already been uncovered back then.

Based on this post from 2012 I was also accused of using multiple logins, another blatant lie. All these accusations were false but eventually they led to my banishment from the forum.

My post about Ref. 6154 with case number 997583 on paneristi.com has been manipulated since then. The case number and some pictures bearing the case number have been removed from the original post, making it impossible for search engines to build a connection. The odyssey of this watch goes on…

Time to publish it here, uncensored. Potential buyers need to know what this watch is all about.

The offered watch had a nicely faded dial with a partial “radium burn” ring and some stains, which are typical for Ref. 6154 dials. The blued hands of this watch were obviously a replacement from a pocket watch.

The same watch was certified on Club Panerai in November 2000.

The case number, 997583, was quite a surprise. It is one of the first watches poping up when googling “Panerai 6154”. A star watch, which was promoted on several watch forums and books.

The amazing thing about this watch is that the current appearance is completely different. Today it has a different dial and the hands have been replaced to match the usual look of a 6154. A comparison with a more common 6154 shows that the hands are still slightly off.

The minute hand appears to have a tall tube. The cannon pinion is not visible, unlike on other 6154’s.

The movement of this watch is different than usual Rolex 618 calibers. It is more refined with subtler Côtes de Genève (Geneva stripes) and more engravings (“Spiral Breguet, Elinvar, Swiss Made”) on the train bridge. This type of movement is prevalent in Rolex pocket watches from the 1930’s on.

The following Rolex pocket watch from 1936 has the same blued hands like the initial watch from the Antiquorum auction. Its movement is almost identical with the one above.

Ehlers & Wiegmann, two German Vintage Panerai experts and authors of several Vintage Panerai books, described the movement of case number 997583 as Rolex 618 Type 1 mod. in one of their publications from 2009. This led to skyrocketing prices of Rolex pocket watches with this specific movement.

A similar bridge design persuaded people into believing that this movement is a Cal. 618. But the truth is they are much thinner and actually also a different caliber.

The correct caliber denomination for this kind of movement is Cal. 622. It shares the same main plate with Cortebert Cal. 620 and is around 1.35 mm thinner than Cal. 616/618.

Here’s a picture of a Cal. 622 found in a Tellus pocket watch from 1932. Tellus and Cortebert were both sub-brands of the swiss company Juillard & Co in Cortebert, La Chaux-de-Fonds.

Let’s have a look at the main differences between Rolex 622 and Rolex 618.

3) In the area of the third wheel Cal. 622 is completely flat, whereas Cal. 618 has a distinctive cavity. The function of this cavity is unknown.

5) The stem of Cal. 622 has a different shape than the part used in Cal. 618. Almost every componenent of Cal. 622 has smaller dimensions than Cal. 618 and most parts are therefore not interchangeable.

6) The movement retaining ring of the watch in question has been altered in order to fix the thinner movement. The recess in the retaining ring is irregular, and looks gouged, like someone filed it to get the screw to fit. The casing screws in original watches sit on top of the movement ring and are not recessed.

There are different versions of Rolex Cal. 622. The movement in the 3646 below with case number 1010379 is also a Cal. 622, with micro regulator and different bridge finish. These mechanisms were excusively used in Eaton Quarter Century Club award pocket watches made by Rolex. 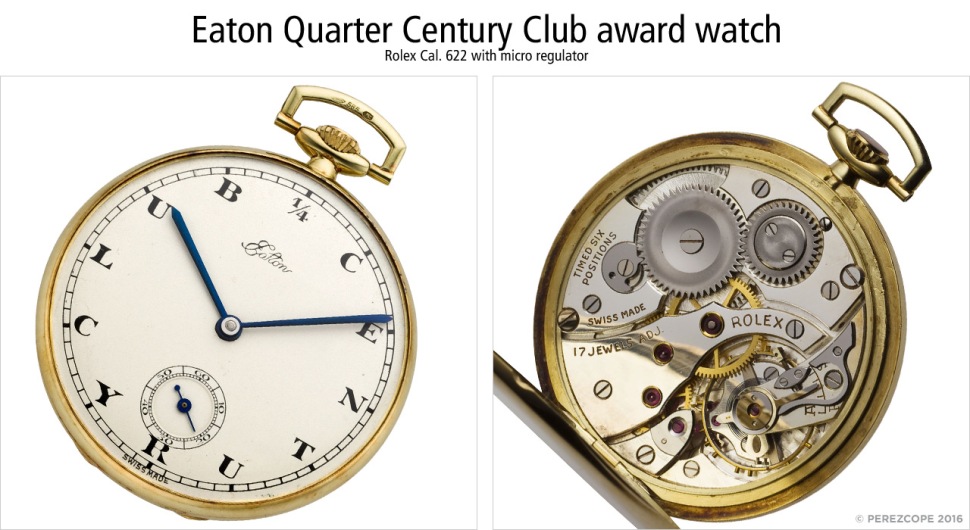 This report would not be complete without the final piece of evidence, the dial from 1999. Every 6154 dial has individual marks and stains and is therefore unique. After going trough all existing 6154’s it was finally found in a display in Francesco Ferretti’s museum in Montecatini Terme, Italy.

Mr. Ferretti, gentlemanlike as usual, commented that in 2002 he gave the case and the crystal to a friend, a lathe operator, to reproduce the bezel. Unfortunately his friend lost the case and the crystal. He was left with the dial, the hands, the case back and the movement. Case back and movement are now displayed in his museum. The dial on 583 (997583) was changed in 2002 for cosmetic reasons and also because the original dial was lacking of one dial foot (Dial feet are needed to attach the dial to the movement).

The 6154 with case number 997583 as it is today is undisputable a Franken-watch. Some may object that after all it is made from original parts. Well, that is true… except for the movement of course and possibly the hands. The movement is definitely from a pocket watch and the altered movement retaining ring is an exception which proves the rule, in my opinion.

It appears that the movement found its way into this watch before the auction of 1999. The term “Elinvar balance” was apparently already mentioned in the 1999 auction catalogue.

Below is Mr. Ferretti’s comment regarding the pocket watch movement. He believes that the movement was replaced with a compatible mechanism due to water damage, since they (the Egyptians?) had not received any spare parts, neither for the 6154 nor the GPF 2/56 and it is obvious that the initial hands were from a pocket watch.

Ref. 6154 is known as the “Egiziano Piccolo”, the little Egyptian. The story goes that this reference was produced in 36 examples on special request of the Egyptian Navy. The more I dig into Ref. 6154, the less plausible appears the Egypt story to me.

I have done some research about Ref. 6154, which can be found here: Egiziano Piccolo?