The sea was churning from the rising winds of an approaching tropical storm and SEALAB 1, the first underwater habitat of the U.S. Navy off the coast of Bermuda, was rocking back and forth at a depth of 84 feet during the emergency ascent. Decompression pressures could no longer be guaranteed. Although the four men in the habitat were true adventurers, they were visibly worried. In contrast to that, they sounded like happy ducks, since they were breathing a gas with a high amount of Helium.

The SEALAB 1 experiment was planned for three weeks but had to be abandoned after only eleven days. The four divers were very disappointed but also fully aware of the risks the U.S. Navy support vessel and its personel were facing on the surface. During the slow ascent of SEALAB 1 by crane (1 foot every 20 minutes), the pressure inside the habitat was gradually reduced in order to avoid decompression sickness.

Due to the heavy movement of the sea, the four men were forced to leave the relatively comfortable habitat at 84 feet and transfer to a submersible decompression chamber.

Time was literally pressing on them. Once in the pressurized chamber, the ascent lasted only a few minutes. However, the four divers would remain in their dry, pressurized chamber on board of the support vessel for another 25 hours. Robert Barth and the rest of the Aquanauts were killing time reading and playing table games. Suddenly, they heard a loud popping sound and something hit the ceiling of the pressure chamber and bounced back to the table. The men looked at each other and were puzzled. The object that landed on the table was a Rolex 5512 crystal. Robert Barth immediately understood the cause of this phenomena.

Tiny Helium particles from the breathing gas required in underwater habitats, slowly worked their way into the watch case during the prolonged stay in SEALAB 1. Decompression was too short for the particles to vent-off and once the pressure inside the watch was high enough compared to the decreasing pressure in the pressure chamber, the weakest part of the watch, the crystal, went bye bye…

Bob Barth wrote a scientific analysis on this subject and suggested a one-way Helium valve as a remedy. T. Walker Lloyd, a dive buddy of Bob, read the very complicated analysis and decided to make a summary of Bob’s ideas for better understanding. This summary made his way to Rolex and as a result, T. Walker Lloyd was hired by Rolex as Oceanigraphic Consultant.

The following Rolex advertisement from 1974 refers directly to these events:

“T. Walker Lloyd has kept in touch with the development of this unique feature (gas escape valve) since its conception”.

The Rolex Sea-Dweller was developed for the Aquanauts of the 1960s, who used to “dwell” in their pressurized underwater habitats for days or even weeks in order to explore the underwater realm and see how it could be exploited. Since their bodies were already accostumed to the high pressure, there was no need for decompression. They could go in and out of their habitats through a open hatch at any time. These men and women truly became free agents of the sea.

The race to push the boundaries and reach unimaginable depths found its culmination with deep diving operations of Comex (Compagnie Maritime d’Expertises), a commercial diving company from France under the lead of Henri Delauze. Rolex started a close partnership with Comex in late 1971. During offshore operation Hydra 8 in 1988, six Comex divers worked at a maximum depth of 534 m/1,752 ft for a total of 26 man-hours. On their wrist, a reliable companion, the Rolex Sea-Dweller.

The following timeline shows the developement of Rolex diving watches in their historical context. Please click the image to zoom in. 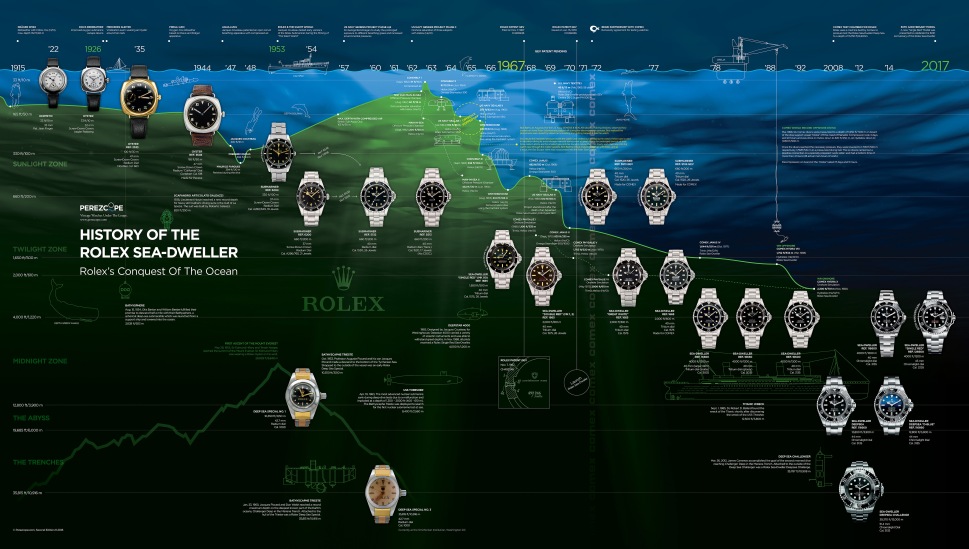 This visual timeline is also available as a high quality print with a size of 150 x 85 cm (59 x 33 inch). HD Inkjet on synthetic paper, laminated. There are two versions:

If you are interested please send an email to: jose( )perezcope( )com 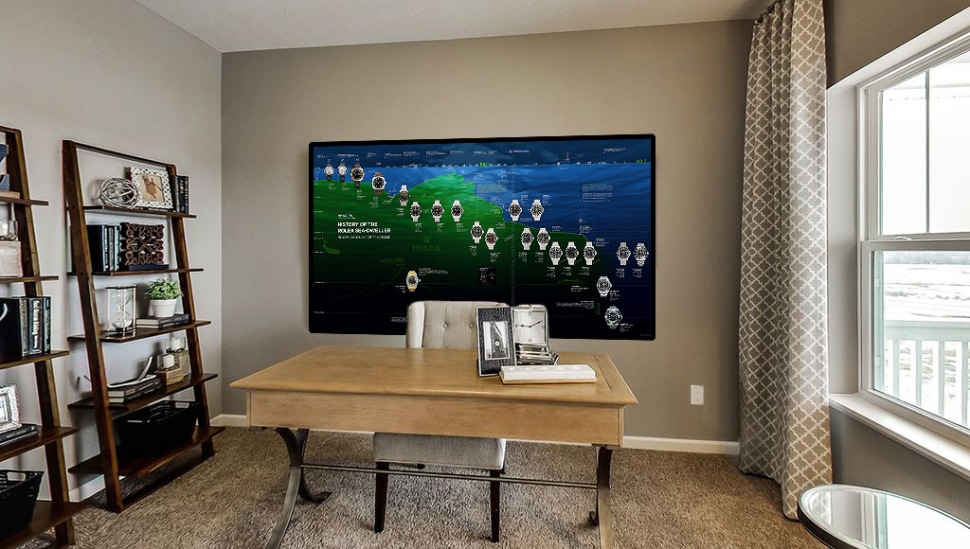 Read more: The SEALAB Chronicles: A Journey To Panama City

Special thanks to: Jake Ehrlich, John Goldberger and Luc Broussaud for their extremely valuable contributions.