There seems to be some confusion when it comes to correct vintage Rolex Daytona case number engravings between the lugs.

Just recently, the authenticity of a super rare Rolex Daytona Paul Newman “Lemon” Ref. 6264 in 18k gold, offered by Christie’s in Hong Kong on May 28, 2018, was publicly challenged due to engravings with an apparently incorrect “typeface”.

As a matter of fact, compared to other watches of Ref. 6264, the engravings on the watch in question are indeed different. This, however, does not automatically mean there is something wrong with the watch.

I have documented thousands of vintage Rolex Daytonas in a highly visual database over the course of time. Thanks to the vast amount of data, it was an easy task to compare the case number engravings. The results are very clear.

Rolex, respectively their case makers, used at least two different “typefaces” for case number engravings. Within the same reference, they used Typeface A (wide digits) for some batches and Typeface B (narrow digits) for other batches. This practice dates as far back as the early 1950s.
.

The image below compares each digit of the two mentioned typefaces with each other. The numbers were taken from different Daytona references but basically all Rolex sport models are affected by this. 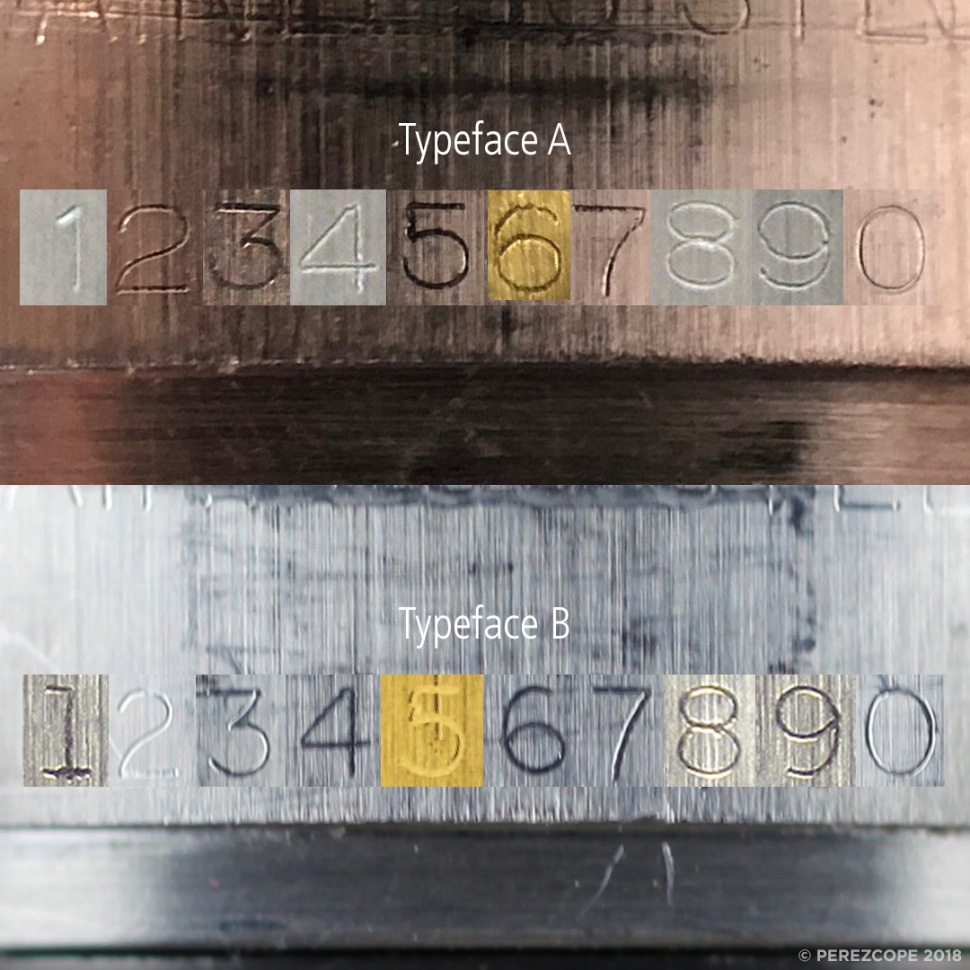 Ref. 6264 was the evolution of Ref. 6241 and was made for only one year between 1970 and 1971. Equipped with the new high-beat caliber 727, this reference was produced in 8 different batches. The first and last batch were made of 18k respectively 14k gold, the rest in stainless steel.

Some batches were engraved with Typeface A and some with Typeface B. Comparing one batch to another is like comparing apples to oranges.

Let’s take a closer look at the offending object. This is the watch in question, a Rolex Daytona Ref. 6264 with Paul Newman “Lemon” dial and 18k gold case. 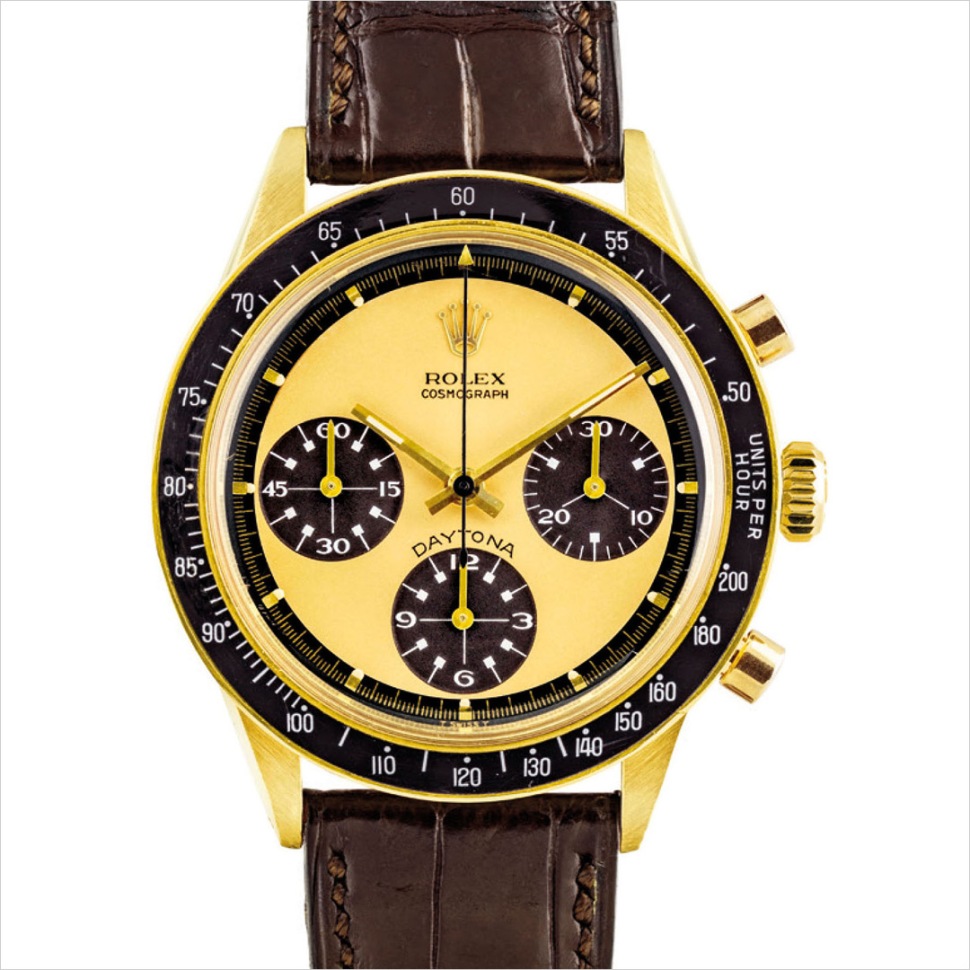 Case number 2357347 belongs to the very first batch of Ref. 6264. The case number engravings of this watch were executed with Typeface B. Here is a comparison with another 6264 from the very same batch. The engravings are absolutely consistent. 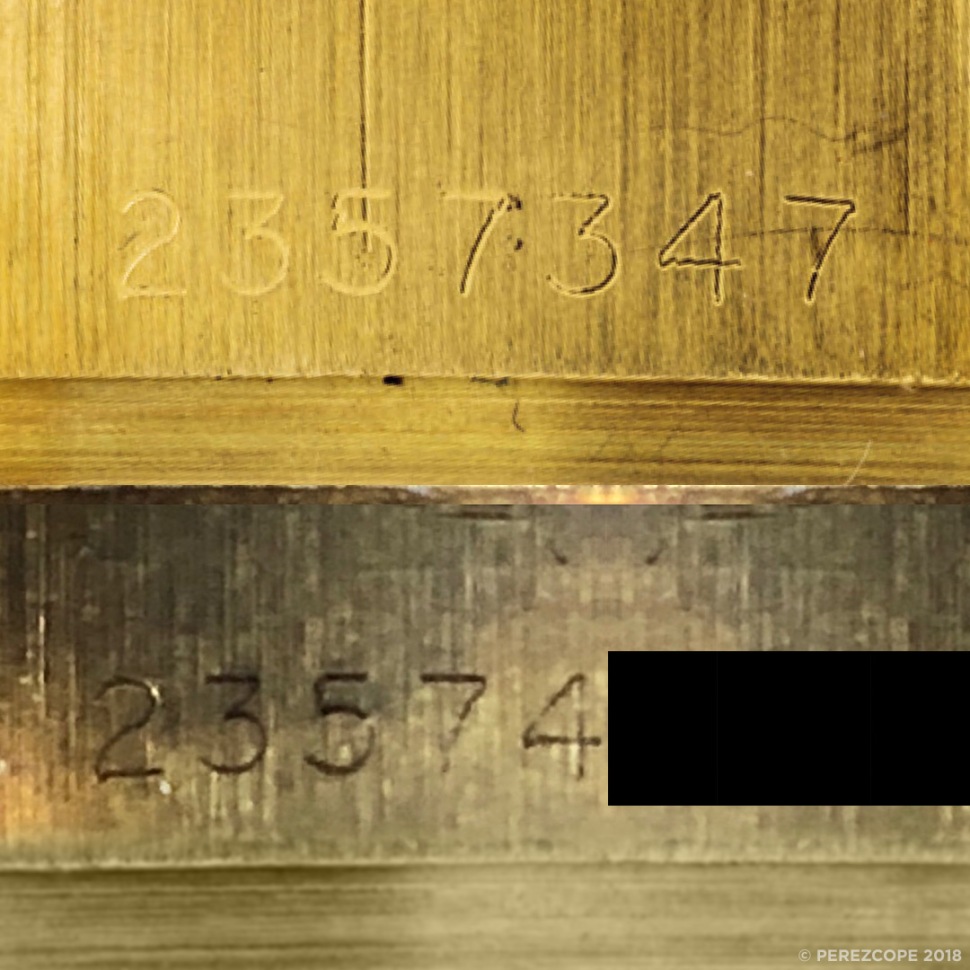 The next picture shows the 6264 reference number between the lugs at 12 o’clock. The picture on top was taken from a different angle, that is why the letters appear narrower on the left-hand side compared to the ones below. When the watch was questioned, it was claimed that two different “typefaces” had been used but the reason for the slight deviation is simply a different perspective. 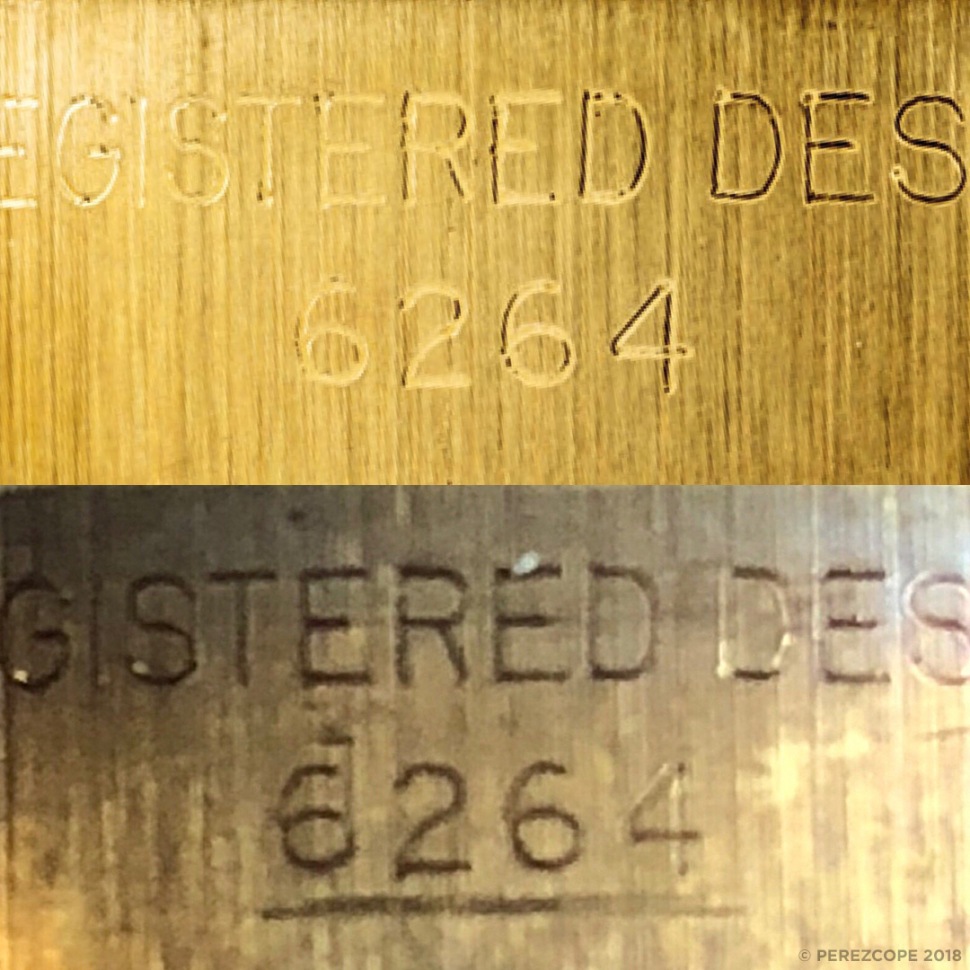 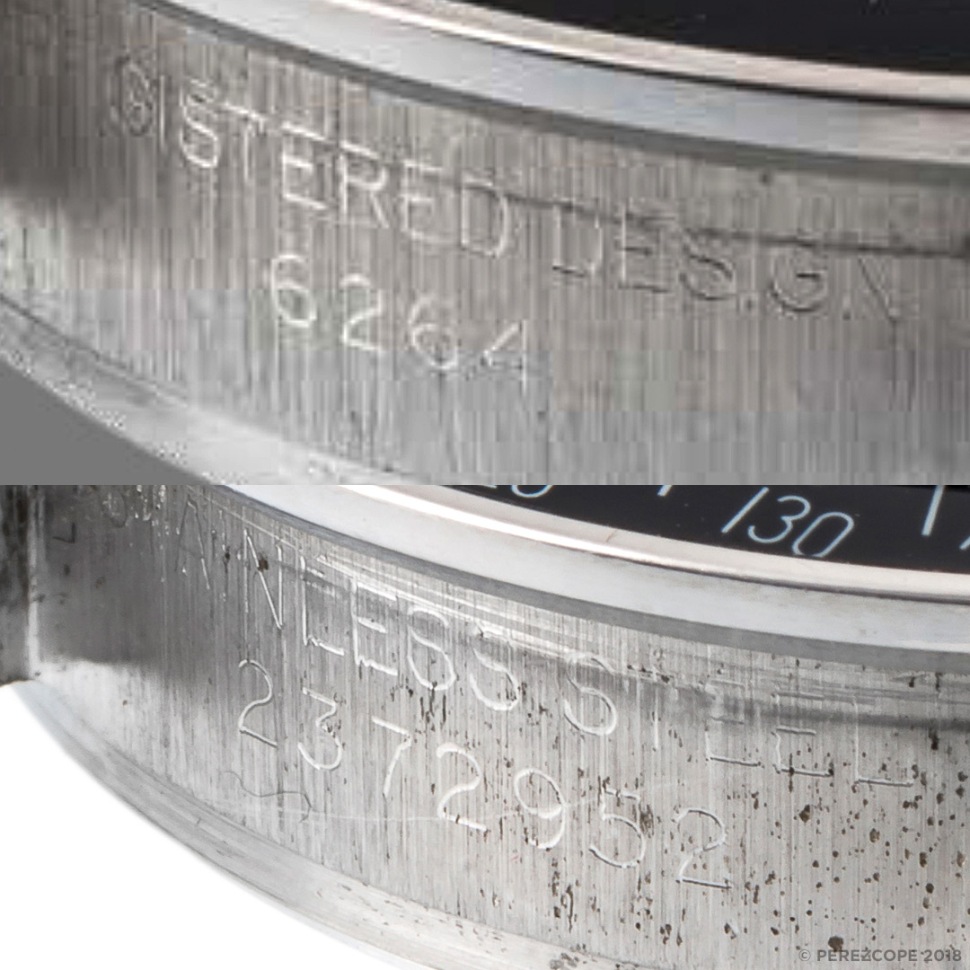 The next pictures shows the engravings of a 6264 from the fourth batch. The engravings were executed with Typeface A. 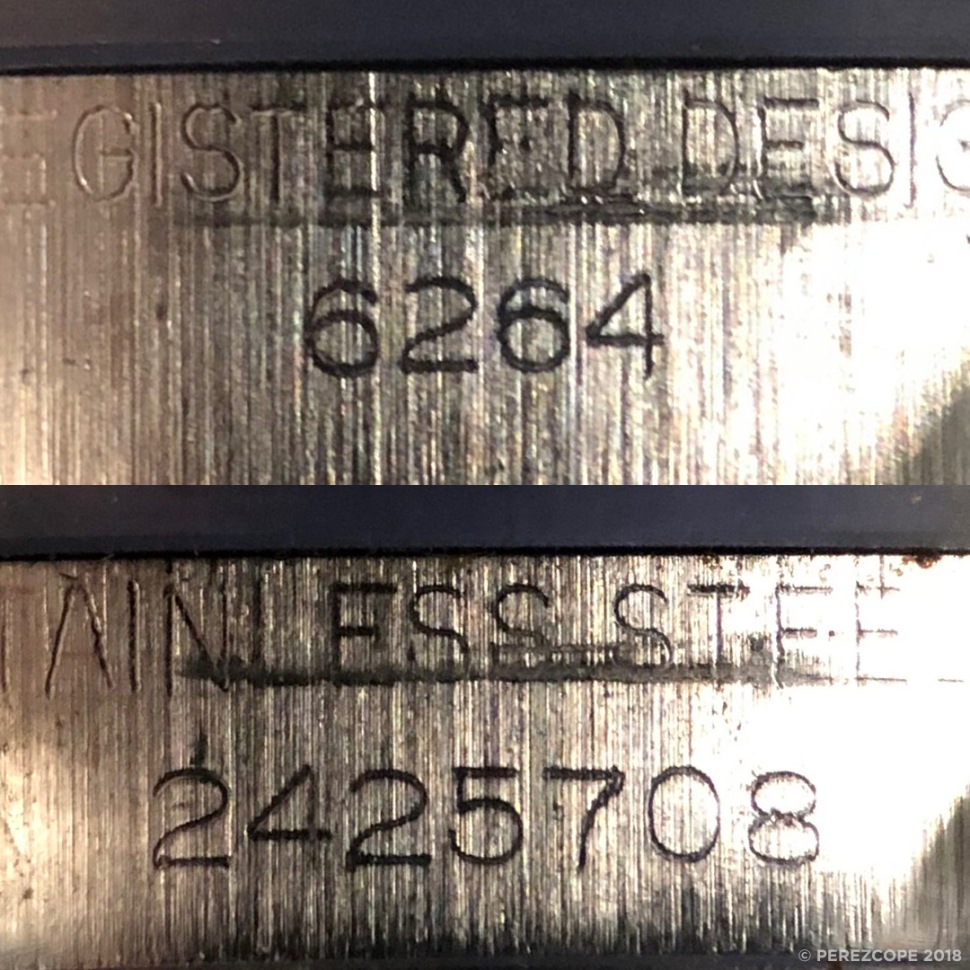 Let’s have a look at other Daytona references. The following comparison shows for instance that within the same batch, Ref. 6240 was consistently engraved with Typeface B. Same batch, same typeface! 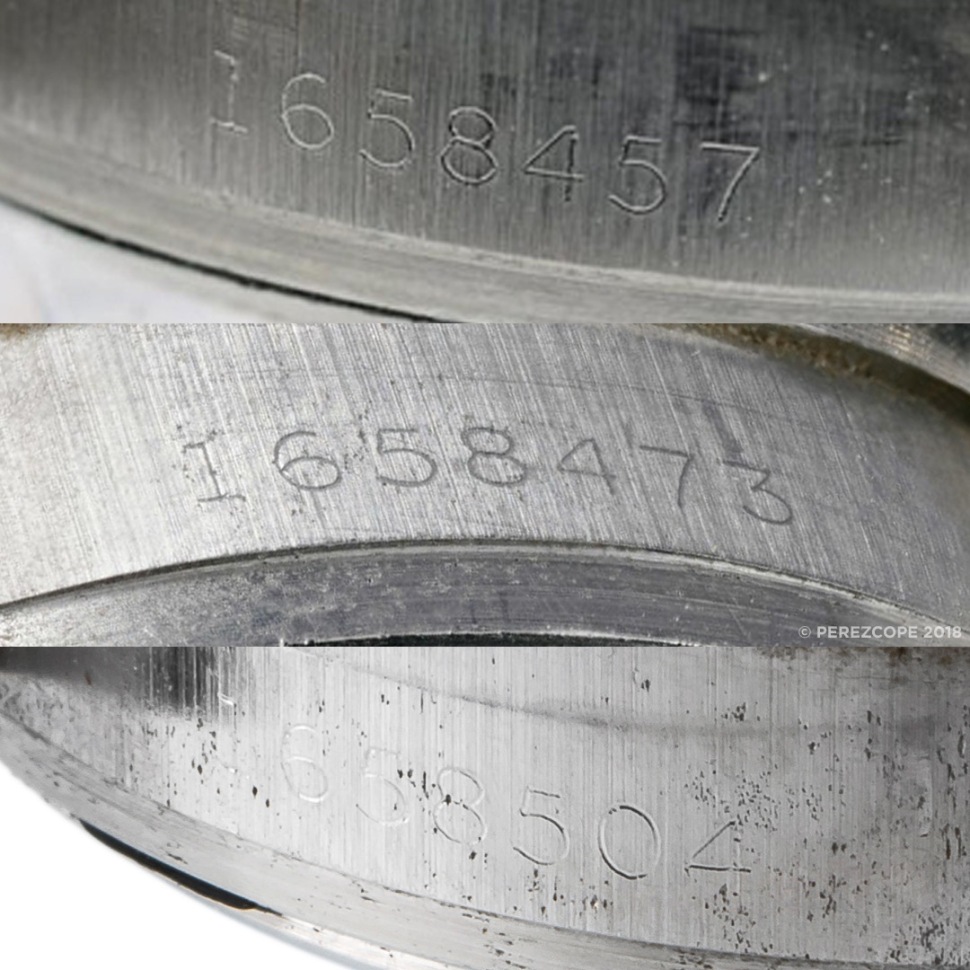 The next picture show the engraved 6240 reference number at 12. 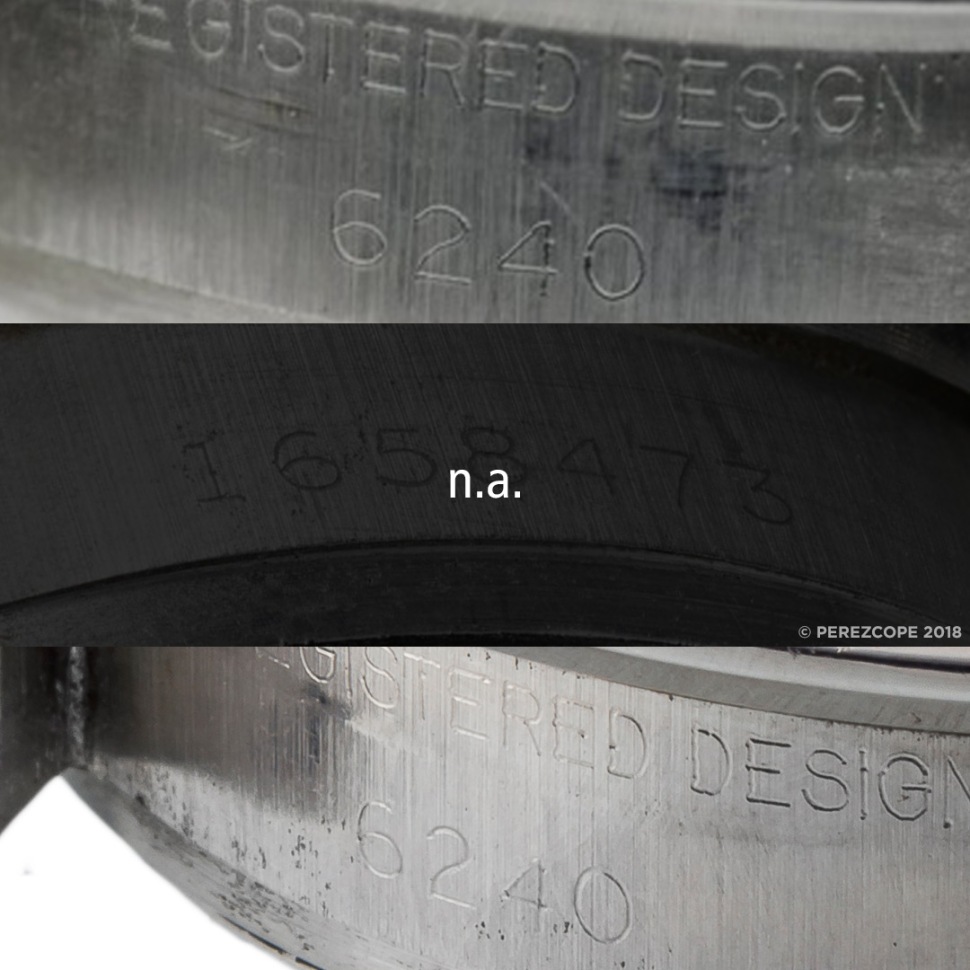 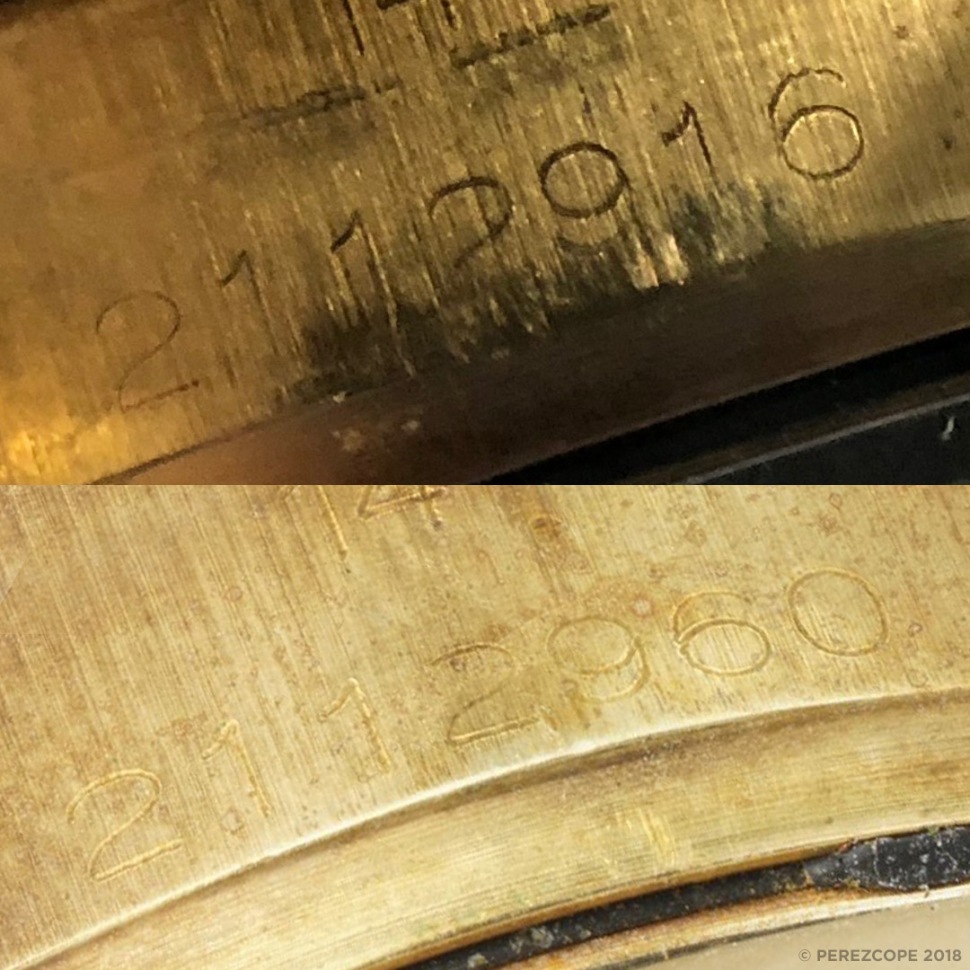 The reference number 6241 is engraved in the very same typeface. 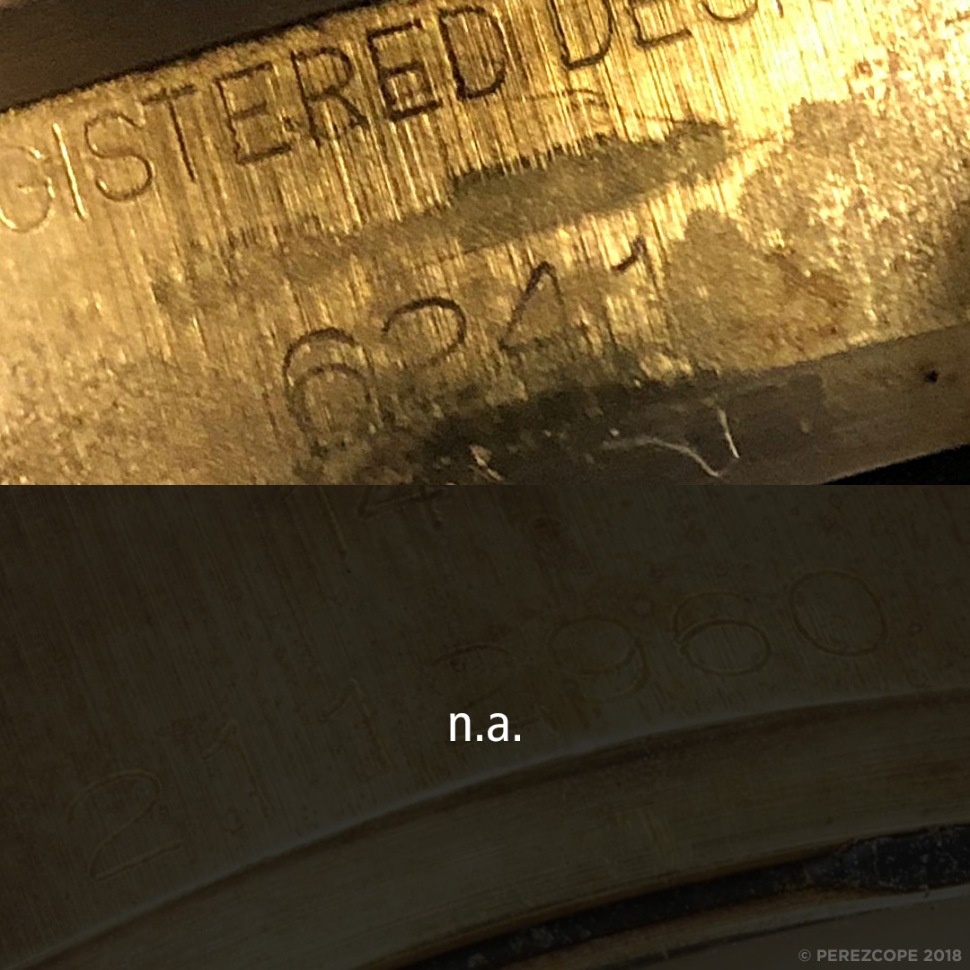 The next picture shows two examples from the second batch of Ref. 6263. This batch was engraved with with Typeface B. Again, same batch, same typeface! 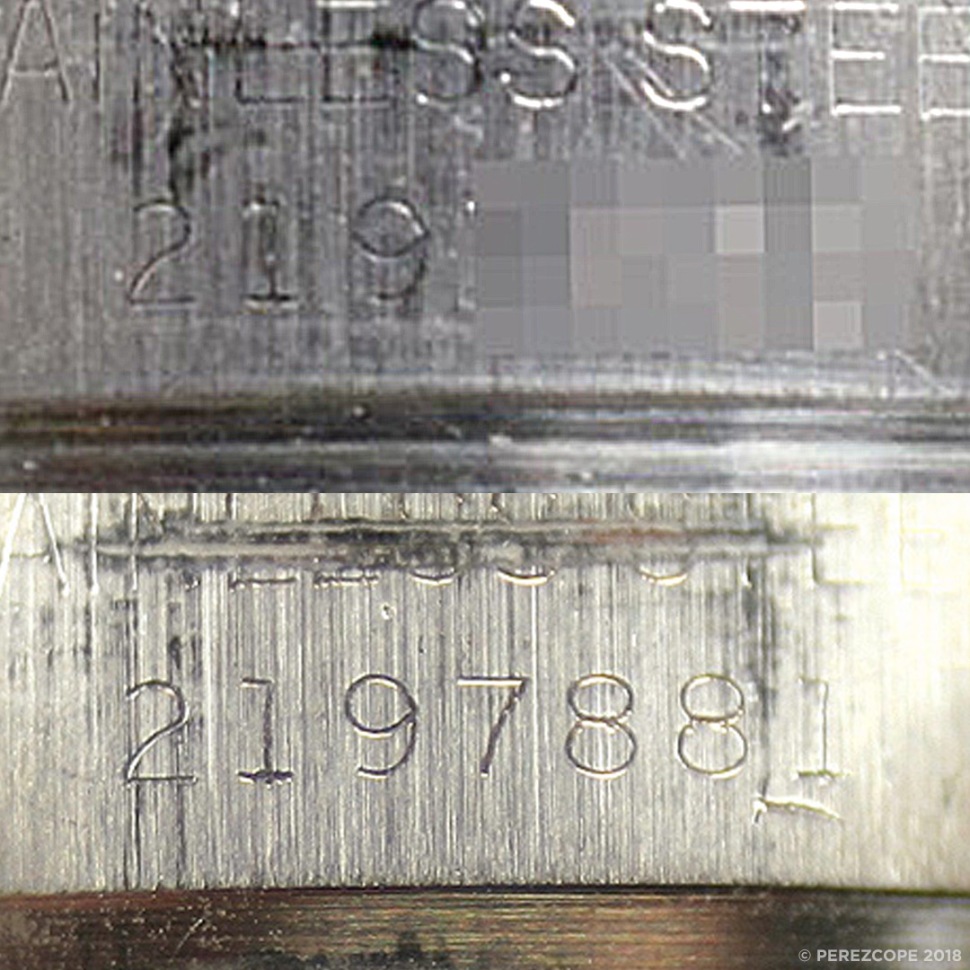 The reference number 6263 is engraved in the very same typeface as the case numbers. 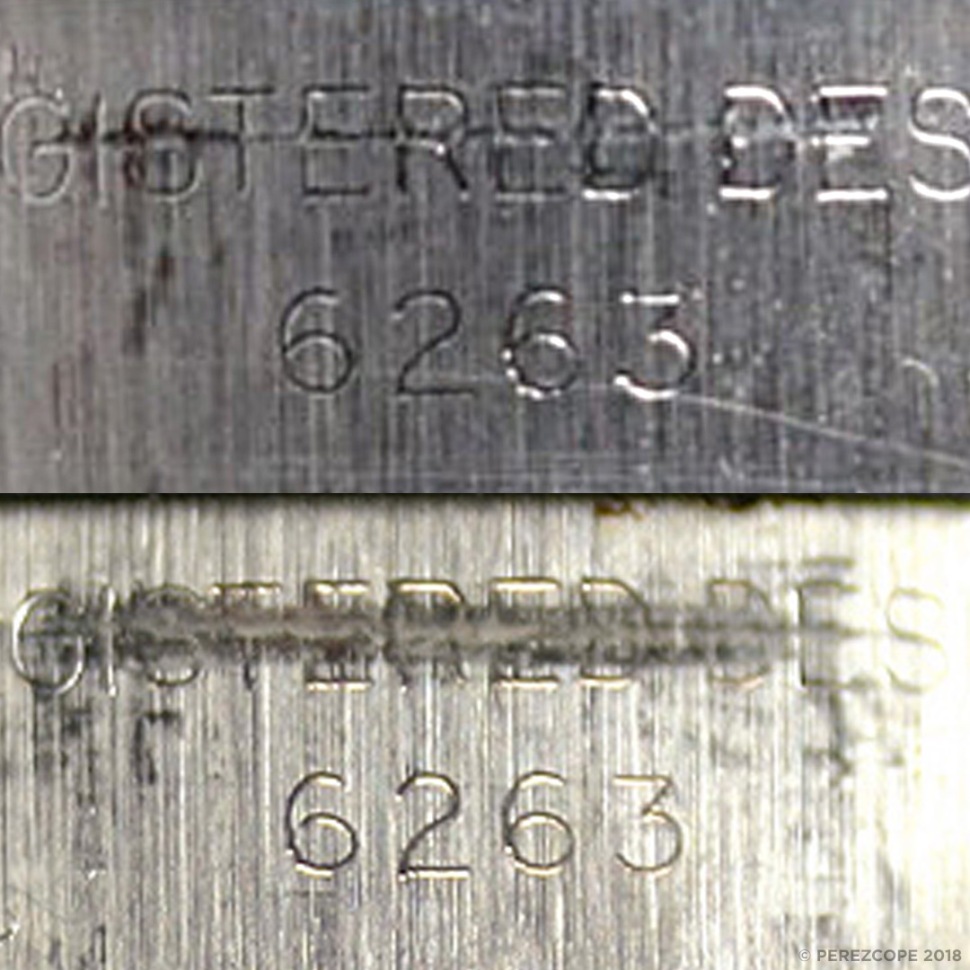 The picture below shows a later batch of Ref. 6263, engraved with Typeface A. Same batch, same typeface? Yes! 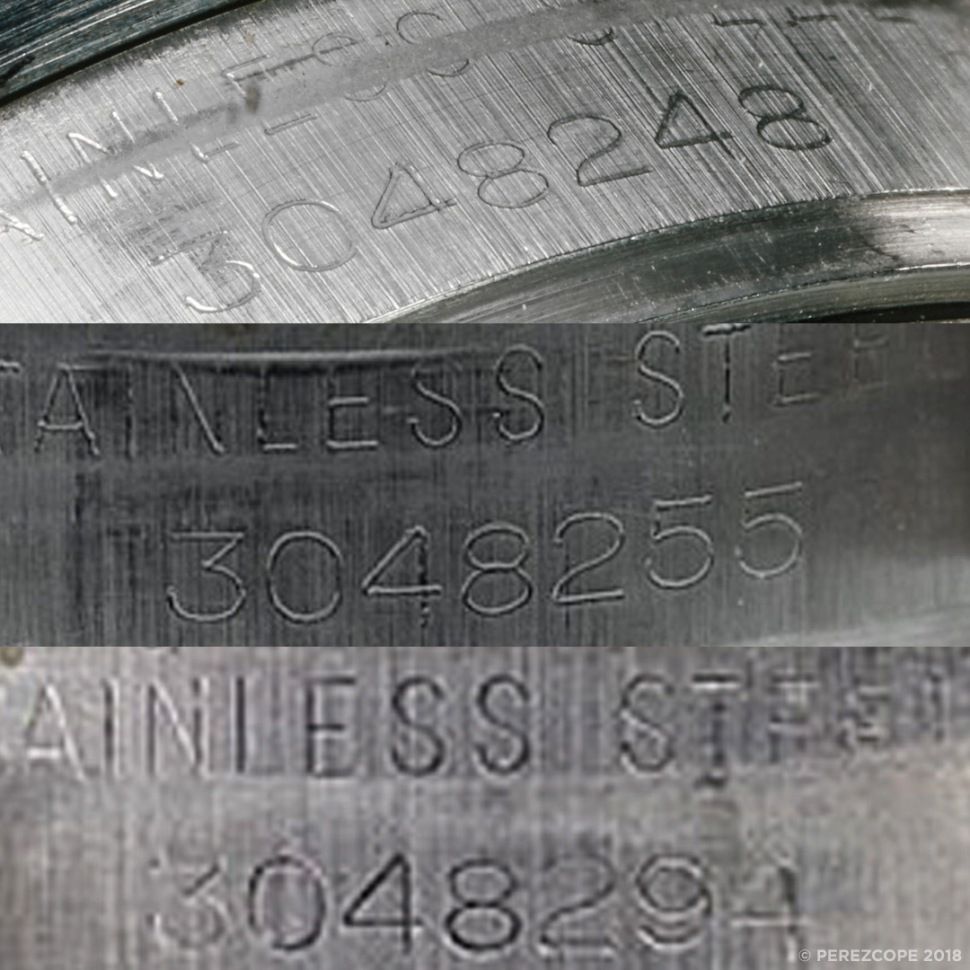 The same typeface was used fot the reference number engravings. 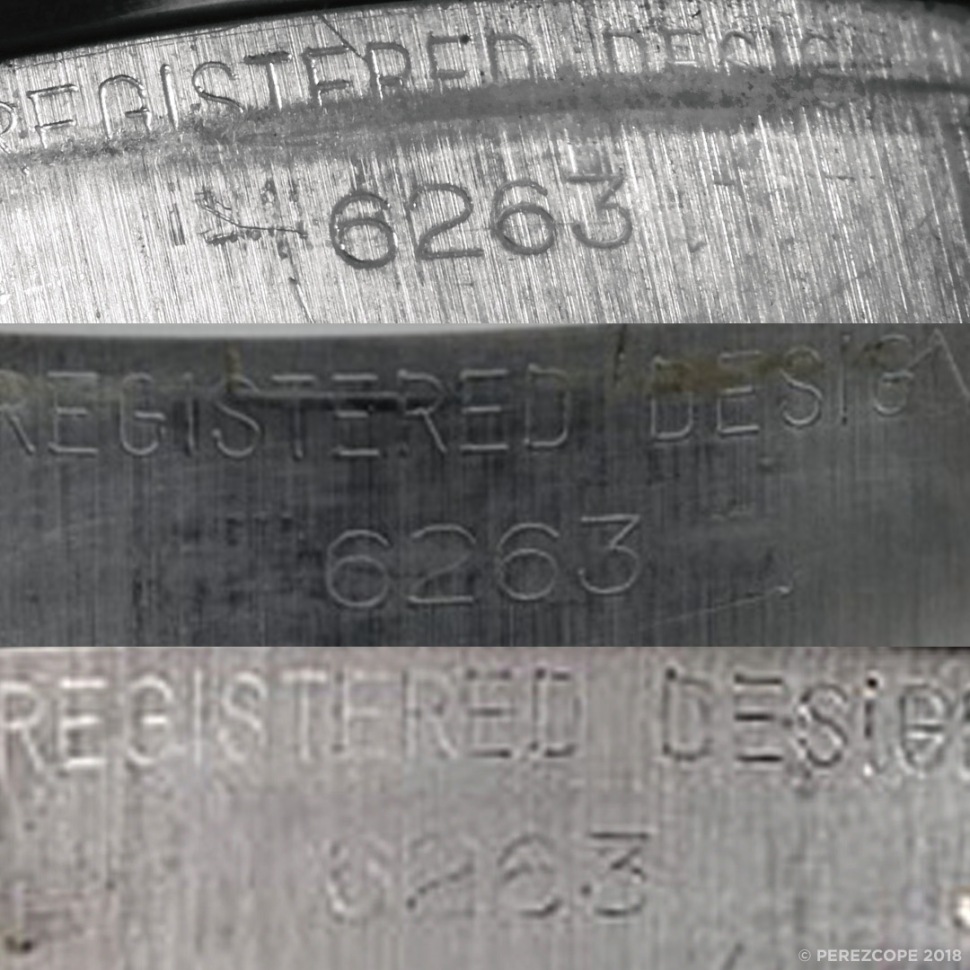 Rolex used Typeface A and B as early as 1953. The following picture shows the engravings of a Rolex Submariner 6204 from 1953, executed with Typeface B. 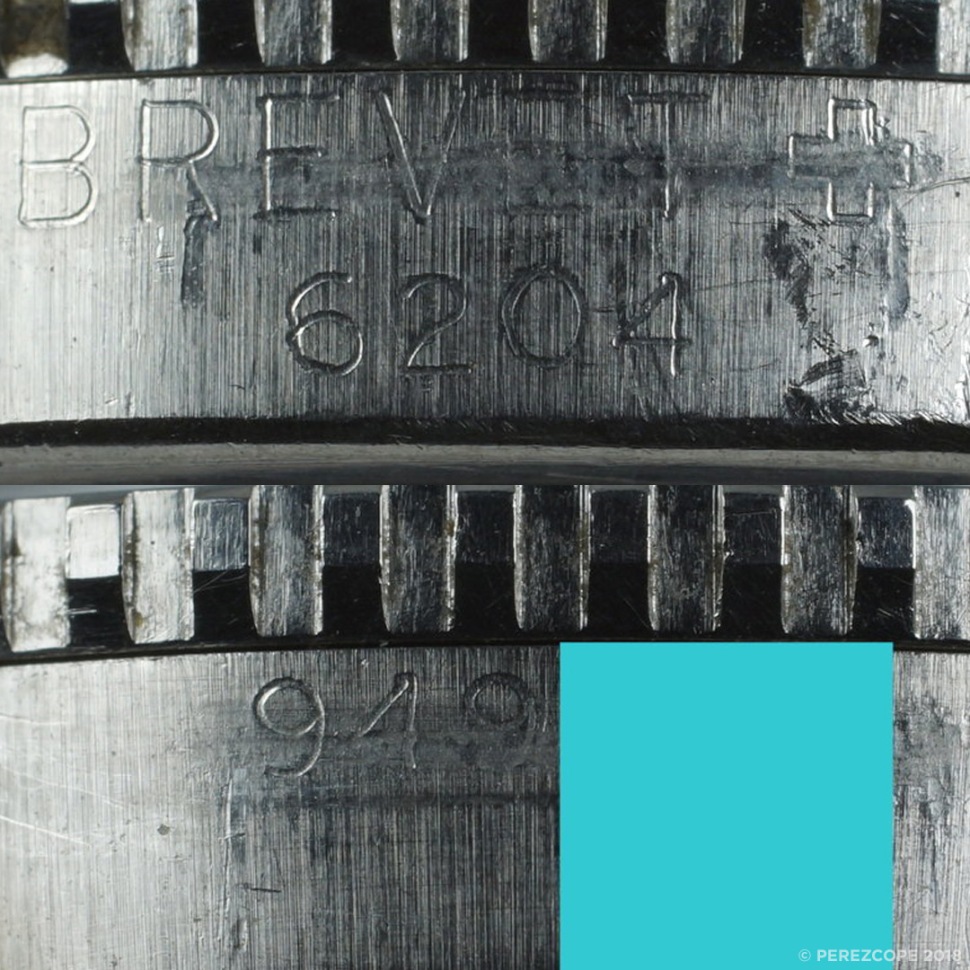 Typeface B was also used for some batches of the Rolex Submariner Ref. 5513. 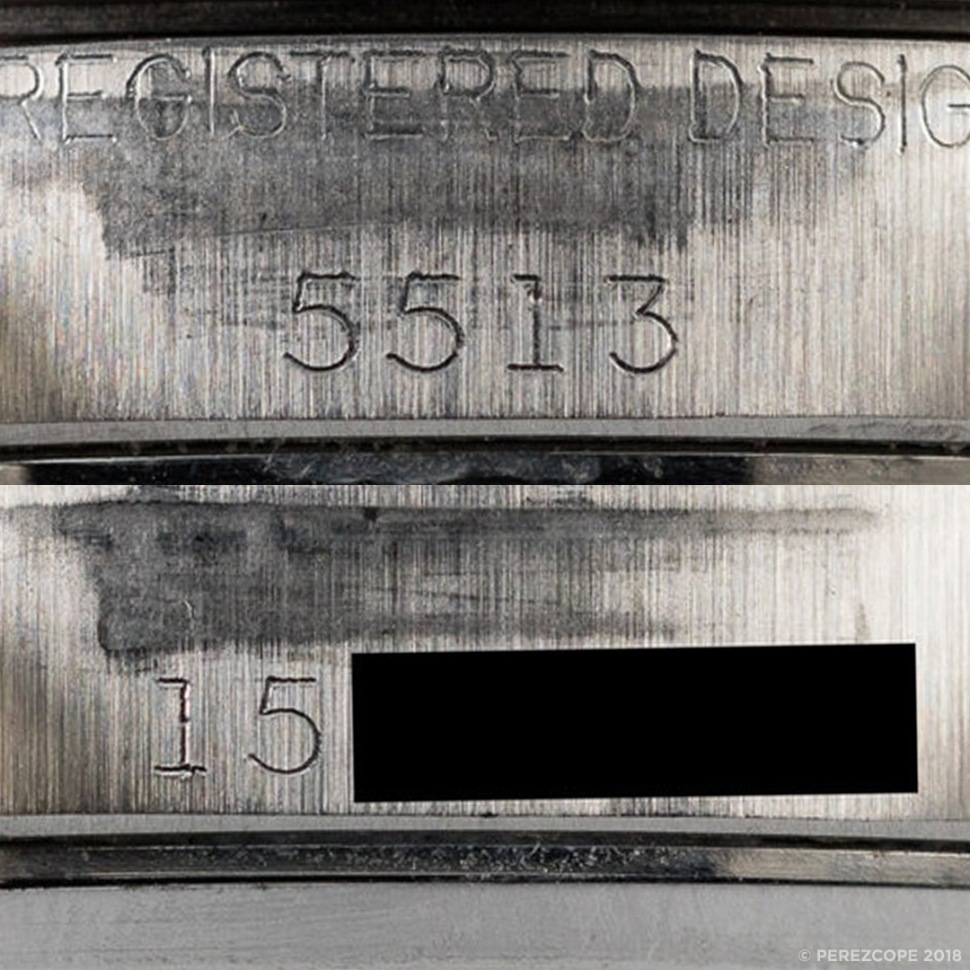 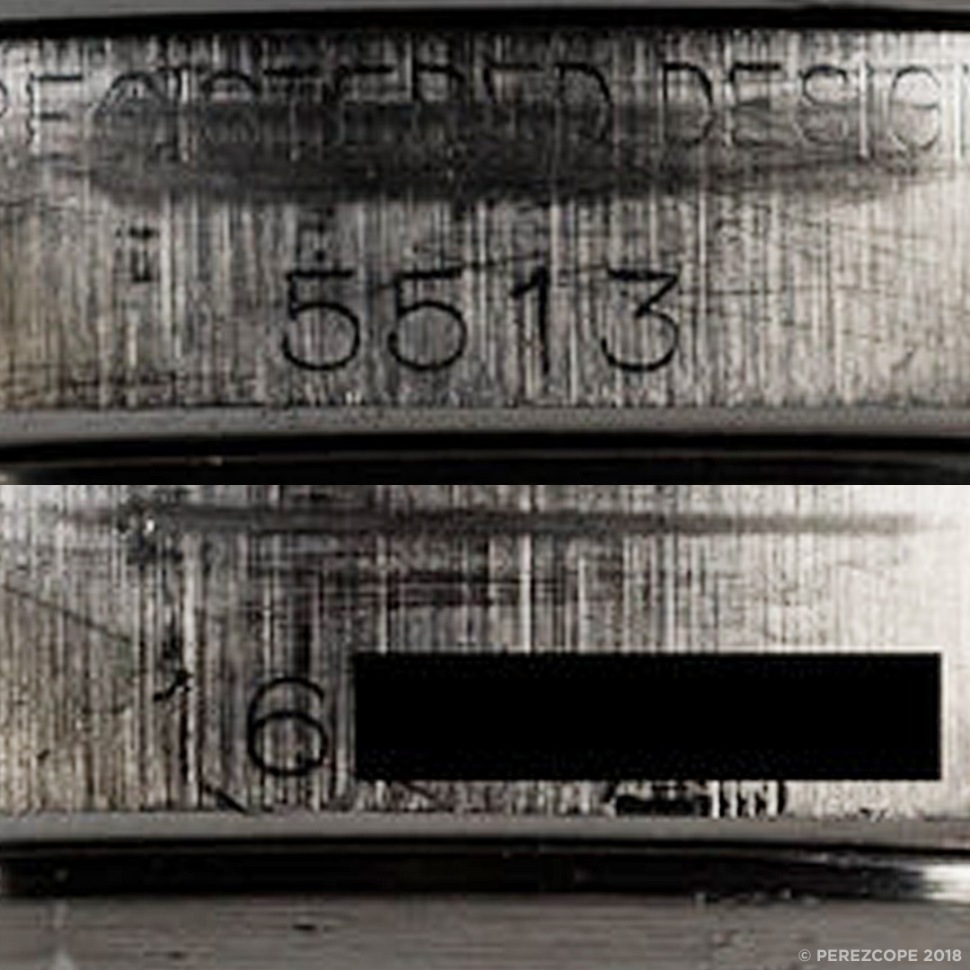 This list would not be complete without the Rolex-Panerai Ref. 6152/1, which was also engraved between the lugs with Typeface B. 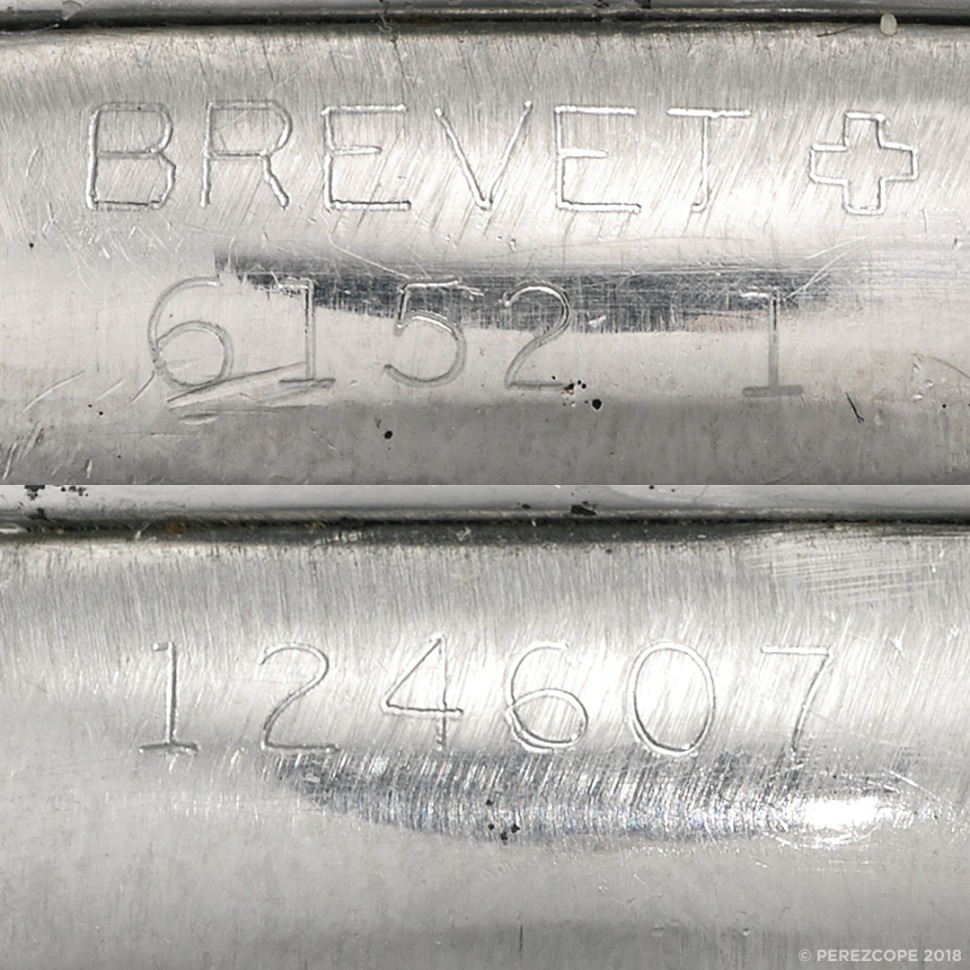 I think this speaks for itself. The claim that the typeface was wrong is debunked at this point. There is absolutely nothing wrong with the engravings on the watch in question.
.

Some case details of case number 2357347 were also criticized. The comparison below shows the case evolution of Ref. 6241 from one batch to another. Case number 1947374 (far left) has two slots (1) for the pushers on the inside of the case. On the following batch, these slots are covered. The area is probably so thin that it can easily break off during a cleaning of the case.

Case number 1947374 (far left) has a very pronounced notch (2) near the 2 o’clock pusher. Apparently, this is how original cases are supposed to look. Interestingly, there is almost no notch near the 4 o’clock pusher. 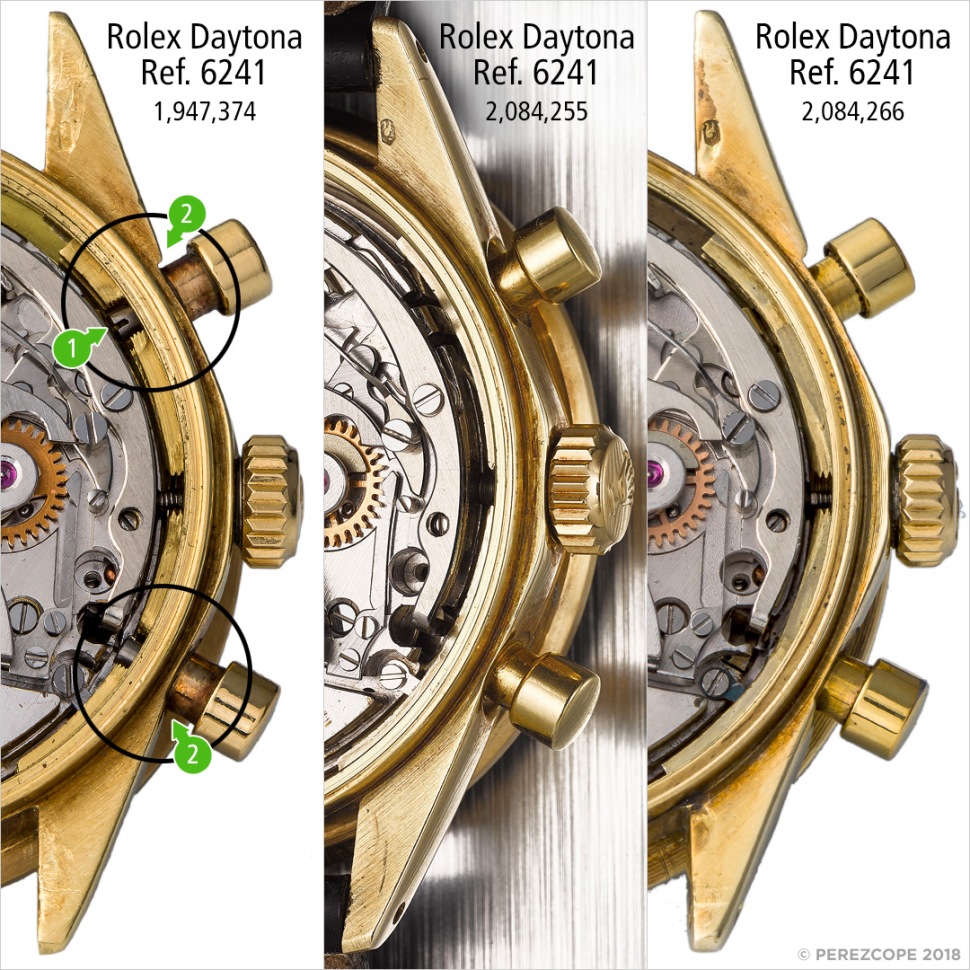 The reason for the existence of these notches could be pretty simple. They could either be a phenomenon of production tolerances, wear and tear, or a consequence of excessive case polishing. If we compare the thickness of the lugs, polishing is the most plausible explanation for those notches.

Let’s have a look at the watch in question, shall we? Ref. 6264 is an evolution of Ref. 6241. Naturally, the case would look more like the last batch of Ref. 6241 than a previous batch. The picture below speaks volumes. The case of case number 2357347 appears to be untouched, probably one of the best out there. 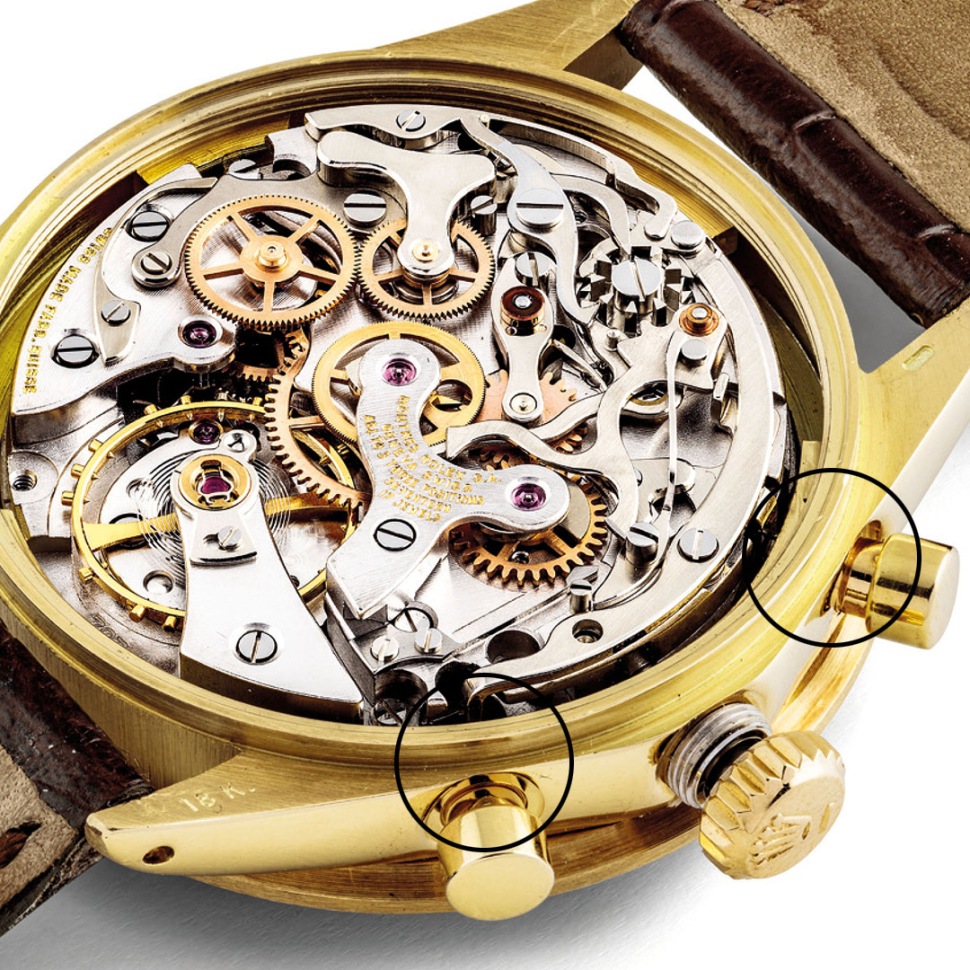 The chronograph bridge (Y-shaped bridge) with 5 lines of text was declared a non Rolex part. A comparison with watches from the same batch shows that the bridge in question is absolutely consistent to the batch it belongs. The criticism didn’t take into consideration that there are differences between the calibers 722-1 and 727, and within batches of the same caliber as well. Again, comparing apples to oranges. 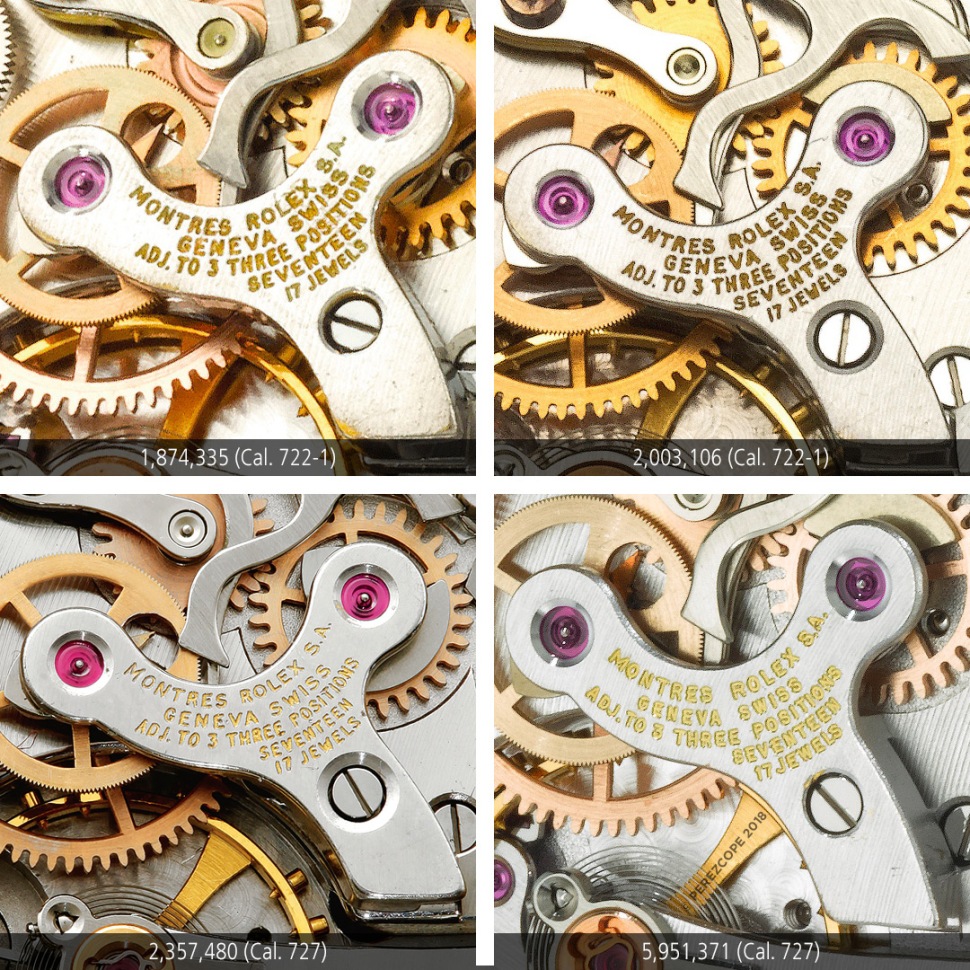 It was also criticised that the Helvetia hallmark (official symbol for 18k gold) on the inside of the caseback lacked the letter “G” for Geneva, the so-called town mark (1). The town mark is a letter that identifies where the item was checked and marked.

Since C. R. Spillman SA, the famous Rolex case maker with Poinçon de Maître number 136, was not located in Geneva, the correct letter underneath Helvetia is “C” and not “G” for Geneva as claimed. 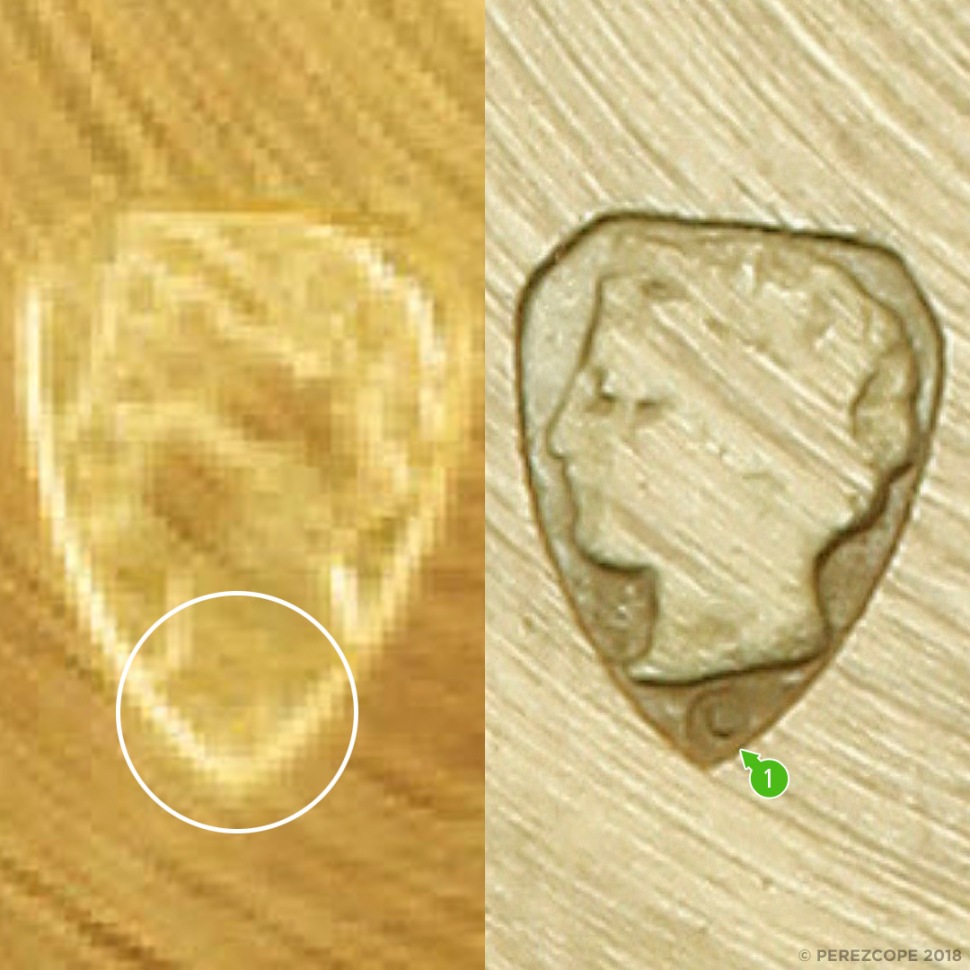 However, the image provided by Christie’s is of such poor quality that it cannot be determined whether there is a letter or not. A closer look at the pixels suggests that the area underneath the Helvetia head is not empty.

The Helvetia Hallmark on the lug of the case clearly features a “C” town mark. 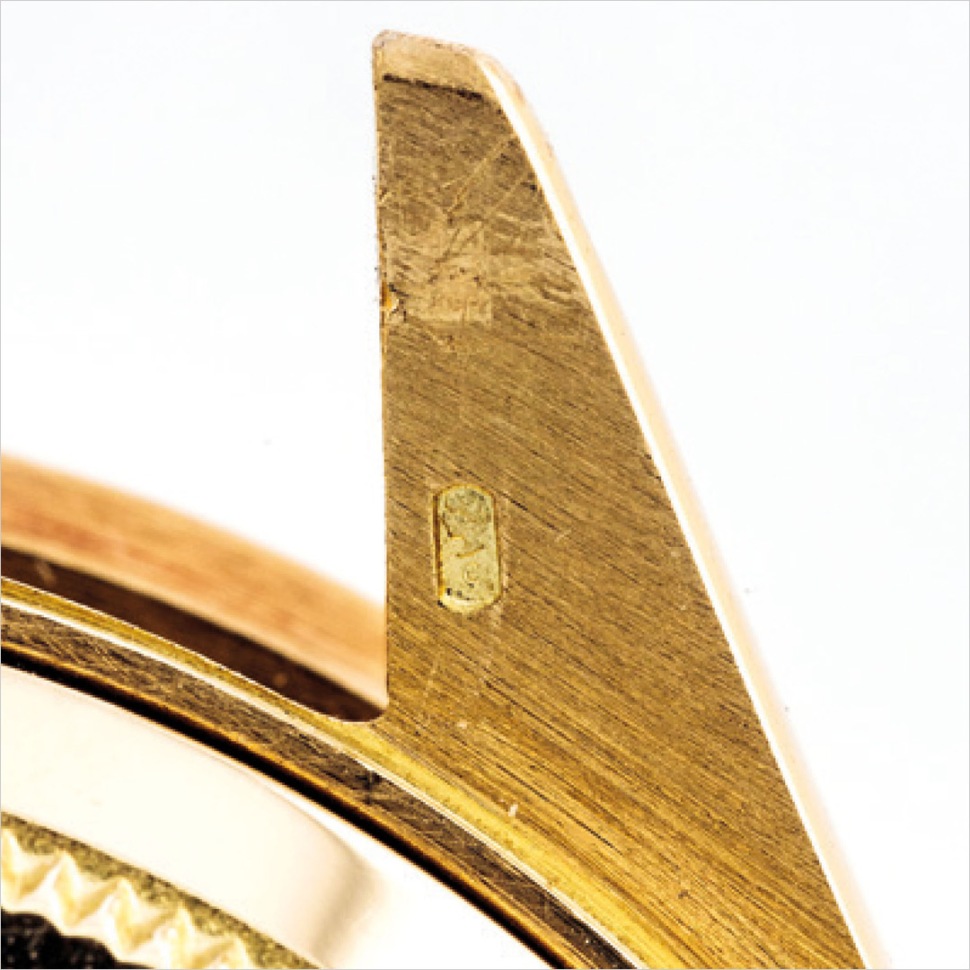 David Boettcher, the author of www.vintagewatchstraps.com has done an outstanding job in researching and documenting all kinds of watch related hallmarks.

This episode shows – once again – how important it is to conduct a proper a research before publicly criticising and calling out high-end items like the Rolex Daytona Paul Newman “Lemon” Ref. 6264 presented in this article.

Selling superficial knowledge as the ultimate wisdom can be dangerous and very damaging. Not only for the consignor or seller of a piece but also for the entire watch collecting world. Watch enthusiasts around the globe are being fed with wrong and unverified information, thus creating a climate of distrust and hatred.

My credo has always been that I need to have absolute certainty before casting any doubt on something. Errors are simply not acceptable on this level, and neither are doubts, or else it’s not worth publishing. Every detail needs to be double and triple checked, at least.

Most watch aficionados and collectors don’t have the time to do their own in-depth research. They should to be able to rely on responsible and trustworthy sources. Proper research is hard work. No vintage watch scholar is born a master. It can take several months or even years before details are fully understood.

I wrote this article because I always believed in separating fact from fiction. It is important to restore the dignity of one of the most exquisite examples of a gold 6264 Paul Newman “Lemon”. I received information that Rolex Geneva checked the watch in the meantime and according to Rolex it is 100% authentic beyond any doubt.

Thank you for your interest.
.