The upcoming watch auctions in New York come with lots of interesting timepieces. One of them is certainly a completely new to the market Rolex “Panerai” Ref. 3646 Type C from 1942/43, offered by Christie’s at their auction “An Evening of Exceptional Watches” on Dec. 6, 2018. After having studied Panerai watches passionately for many years, one look at this watch is enough to understand this is a truly amazing piece.
. 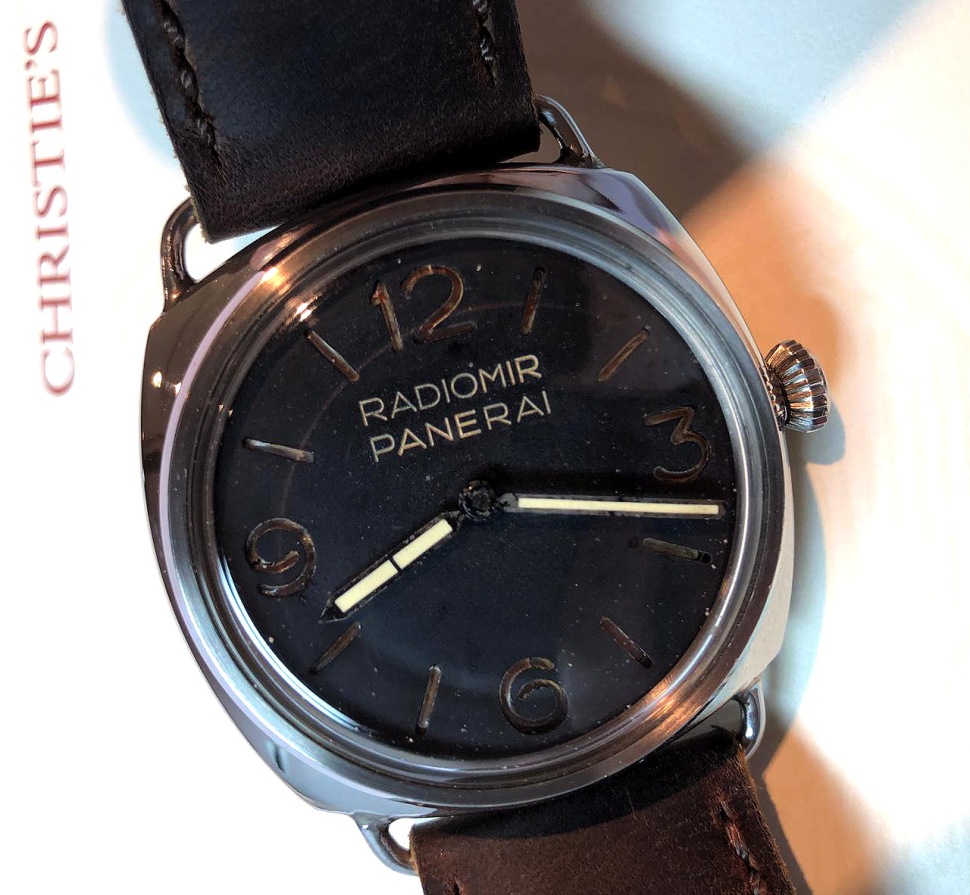 Auction link: Rolex Made For Officine Panerai. A Very Rare and Large Stainless Steel Cushion-shaped Diver’s Wristwatch, Made for the Italian Navy (Christie’s)
.

According to Christie’s, this watch remained in the same American family since the 1940s. It can therefore be assumed this watch was possibly taken as a war trophy or perhaps it was traded for cigarettes or similar goods, which was quite common for the chaotic time right after the war. It is unknown whether the watch originaly belonged to an Italian Decima MAS Incursore or a German Kampfschwimmer. Both is possible since the first batch of watches confiscated by the Germans were meant for the Italian Decima MAS and bore the typical Radiomir Panerai inscription.
.

The present watch is a late Rolex “Panerai” 3646 Type C from 1942/43 with a typical first generation aluminium sandwich dial made by Panerai. This type of Panerai dial developed a distinctive and sought-after dark red patina over the course of time. The heat blued hands have probably been relumed at some point.
.

The whole dial appears to be slightly rotated clockwise. This phenomenon is known and shouldn’t be overestimated. As long as the engravings are correct, there is nothing to worry about. More on this later.

The earliest watches were equipped with so-called “plastic rivet” dials which were prone to extreme warping after exposure to heat. The following picture shows such a damaged early Panerai dial. 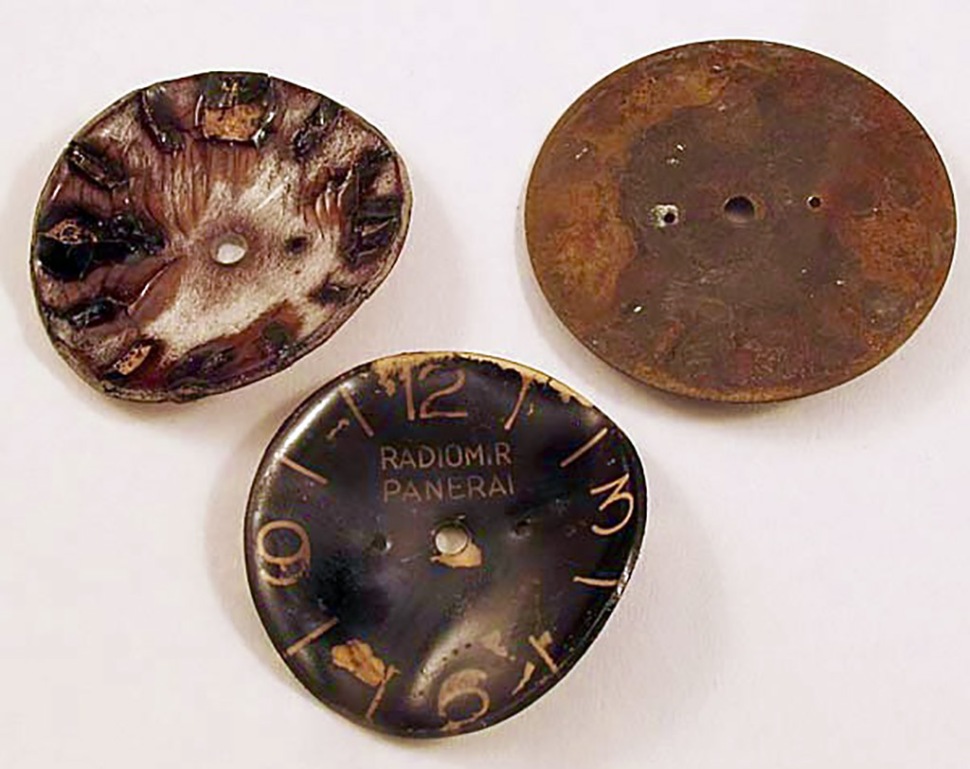 Panerai developed a completely new dial, consisting of three different layers. A large amount of lumimous Radiomir paste was encapsulated underneath a transparent layer of plastic which in turn was retained between two layers of metal, avoiding so any deformation.

The upper disk was made of anodized aluminium and had perforated numerals and markers where the luminous material would shine through. Due to this construction, the numerals at 6 and 9 received their charismatic look with the open loops.

The watch in question has such a dial. The dial engravings appear to be absolutely original. Correct typeface, well executed and straight. Original Panerai engravings have one interesting pecularity. The last R in Radiomir is slightly shorter than the first R and the R in Panerai.

The Rolex Oyster case appears to be in great condition. The soldering of the wire lugs seems intact. Have a look at the heat blued hands showing a colour range from dark blue to purple. Amazing!

Here’s a detail picture of the Rolex crown No. 11. The crown is in great shape. 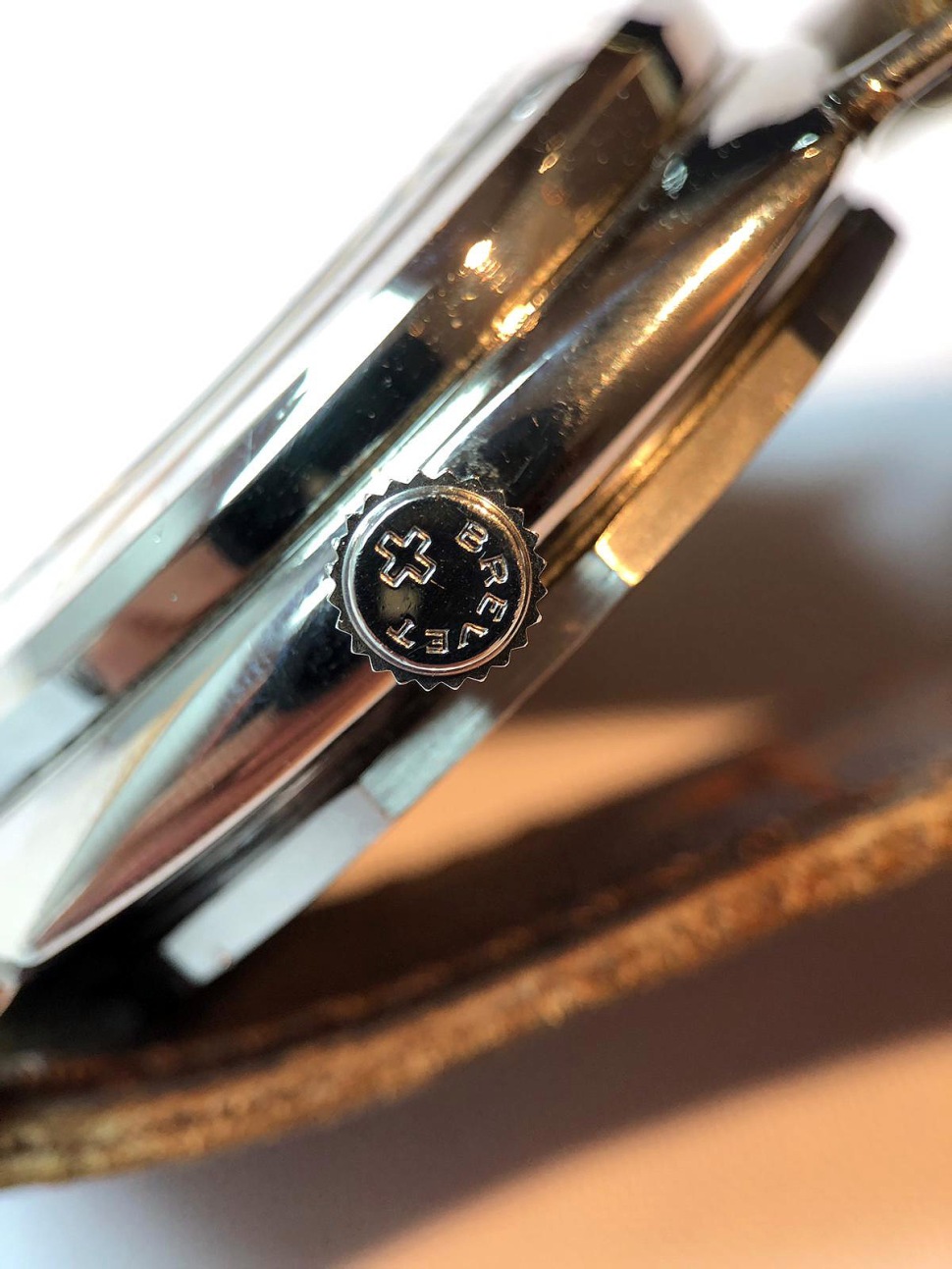 The dodecagonal (12-sided) caseback bears the typical Rolex hallmarks on the inside. Case number 1010315 with its seven digits is a typical Rolex pocket watch number. The first three types of Ref. 3646 (Type A, B & C) were produced within the pocket watch range. Later batches had Oyster case numbers.

The caseback has no markings on the outside.

The Rolex Cal. 618 with 17 jewels and Breguet overcoil balance spring is flawless and absolutely matching for this reference type and case number range. Everything is as it should be. This movement withstood the test of time in excellent condition. The beautiful swirl finish on ratchet and crown wheel is well preserved as well. According to my research, these movements were completely made by Cortebert, without any involvement from Rolex.

The brass-coloured movement retaining ring is matching too. Later batches had a ring with a metallic colour. In the following picture, the crown is in a awkward position. This is due to image post production. However, the soldering around the crown tube appears to be correct for this batch.

The Rolex engravings follow the upper curve of the train gear bridge which is absolutely correct for this type of watch. In my books, this type of movement is called Rolex 618 Type 1a. 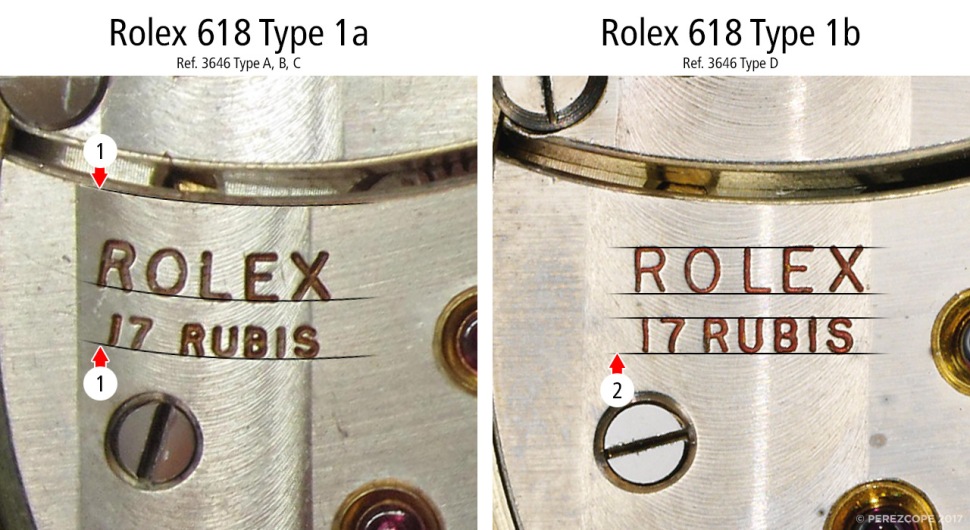 The “Fab. Suisse” engravings are also slightly different between the early batches and later batches made in 1944.

It’s a real pleasure to come across a 3646 Type C in what appears to be a completely unmolested condition. Everything is as it should be. This watch will be offered at “An Evening of Exceptional Watches” and it sure is an exceptional watch! The story behind the watch is probably as good as the watch itself. I wish we knew more about the provenance. Depending on where the American GI was stationed, it would be easy to figure out if this was an Italian or a German watch.

Historical Panerai watches are extremely underrated at the moment. Therefore, this could be a fantastic opportunity to buy a great watch at a very interesting price. To me, this is definitely a strong buy.

(All images of the watch in question courtesy of Christie’s)
.

The Rolex Panerai Ref. 3646 Type C with first generation aluminium sandwich dial is an important milestone in Panerai’s history. These watches were literally shaped by historical events. The infographic below shows all vintage Panerai watches in their historical context. Please click the graphic to download the highres version.

Printed with HD Inkjet on heavy synthetic paper and laminated.