A late Rolex Panerai 3646 with a very peculiar detail will be featured at Sotheby’s autumn auction Important Watches in Hong Kong which will take place on Oct. 8, 2019. The watch in question belongs to the very last batch of diving watches that were sent to Panerai in Florence before the end of WW2 (World War 2). The present piece would be the perfect example for a late 3646 – if wasn’t for one tiny detail: a fake Rolex stamp on the caseback. Watches belonging to this batch are supposed to be completely anonymous. No Rolex inscriptions, neither on the movement nor on the case and this for a good reason.
. 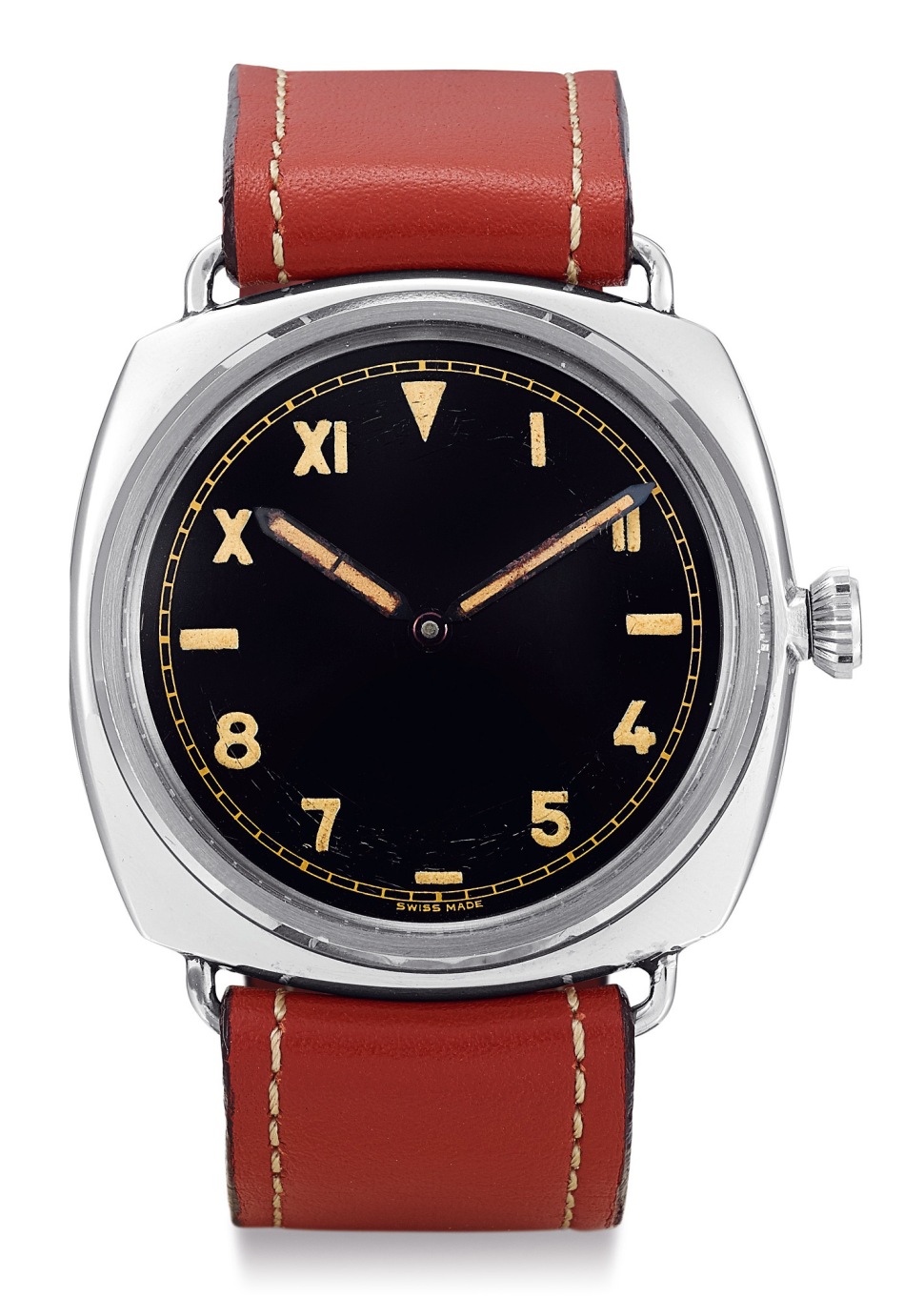 I don’t think this piece was ever in contact with salt water or with water in general, which leads me to believe it was part of a lot of 20 to 30 watches found at the old Arturo Junghans watch factory in Venice in the early 1990s. More on this later. Let us first have a closer look at each part of the watch.
.

As mentioned earlier, with Rolex case number 260918 the present watch belongs to the last batch of Ref. 3646 that was manufactured in 1944. This batch left Geneva with so-called Error-Proof dials, designed and patented by Rolex in May 1941. 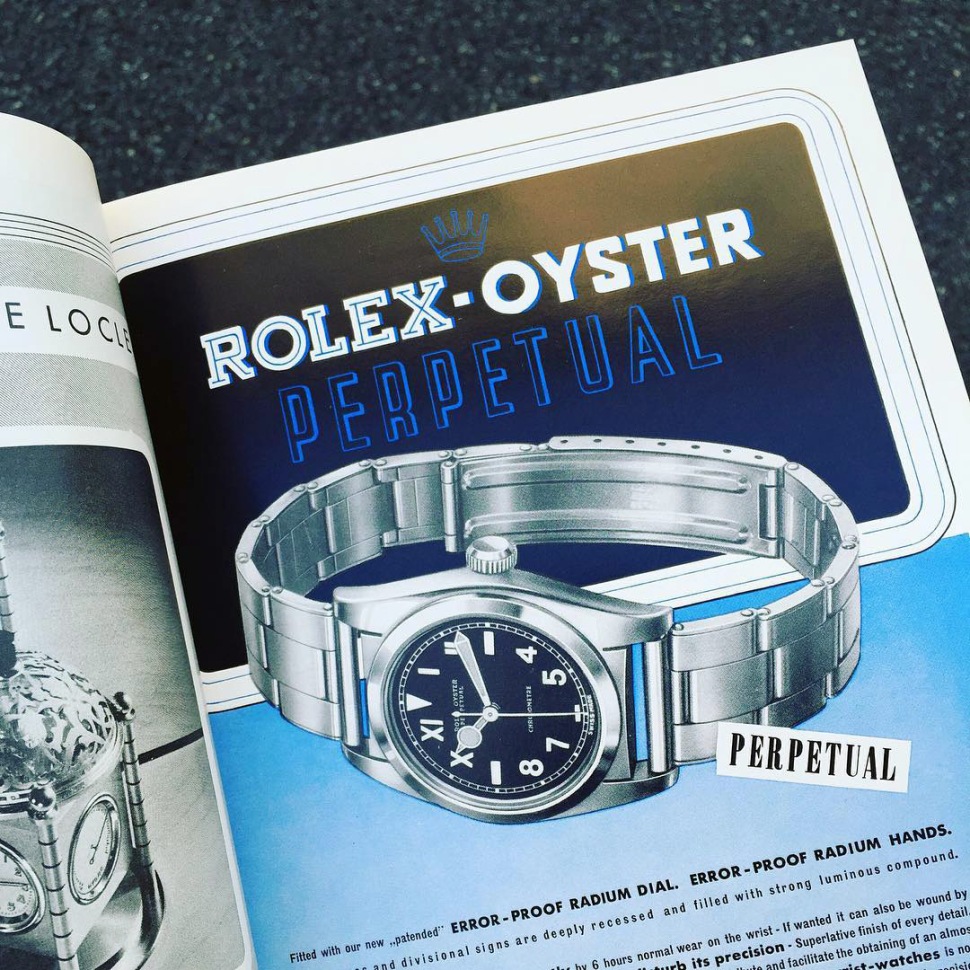 The following picture shows Rolex’ patent CH221643 for the Error-Proof dial. Click the picture to enlarge.

Previous 3646 batches were sent to Florence with white transport dials. Panerai then replaced these dials with their signature sandwich aluminium dials. At some point, Panerai was no longer able to produce their own dials and Rolex supplied the last batch with their most luminous dials at the time, the so-called Error-Proof Radium Dials.

The luminous hour markers on 260918 have developed a beautiful cream colour patina. The same can be said for the lume on the skeletonized heat-blued steel hands. Bluing is a process to protect steel against rust. After 75 years, the hands have nevertheless developed a fair amount of rust. 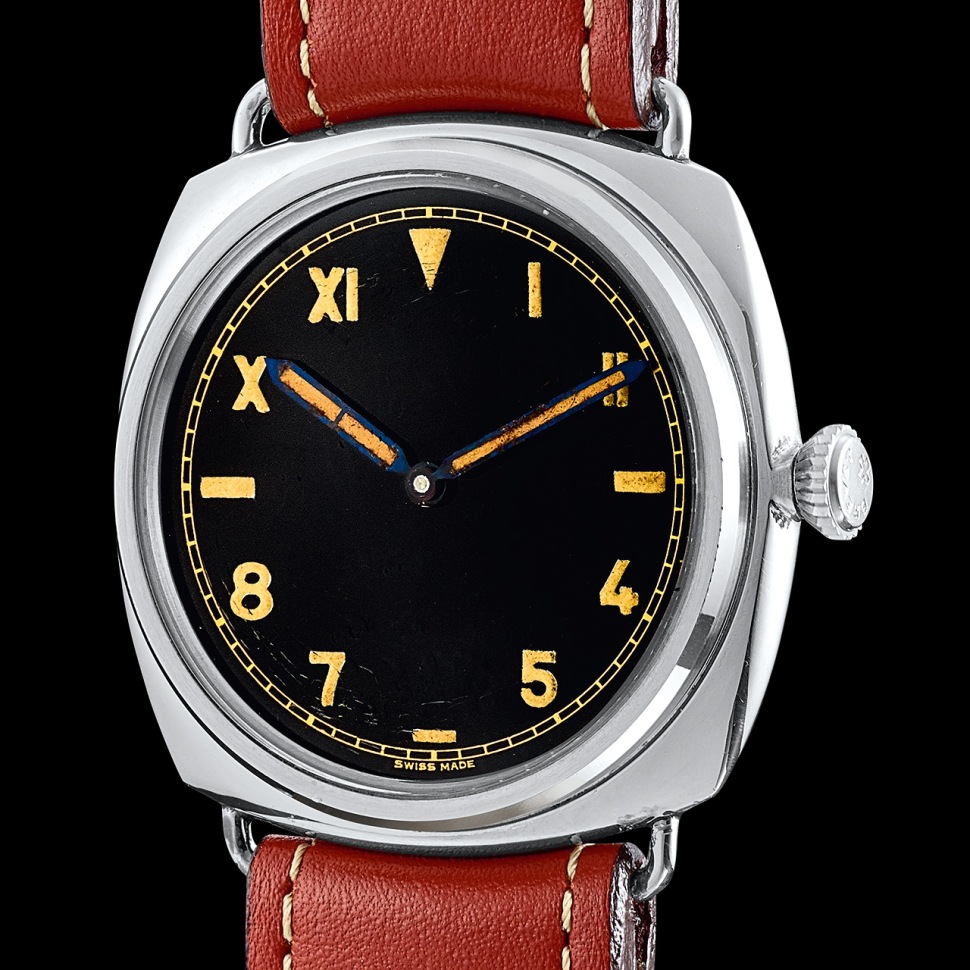 The case of this watch is in a sensational condition. It appears to be unpolished and basically unused. The case features the typical distinctive flat collar around the crown tube which can be found on all 3646s belonging to the final batch.

The back of the middle case shows almost no sign of wear either. The outside of the caseback still bears the original circular machine finish that was applied on a lathe. Only very minor scratches are visible.

A closer look at the surface where the lead gasket lays flat between middle case and caseback shows an unmolested surface. Watches that were used in salt water typically show some sort of pitting or other corrosion/discolouration in this area. The lack of it is a clear indication the watch was never submerged in salt water, for if it had been there would likely be some sort pitting visible. 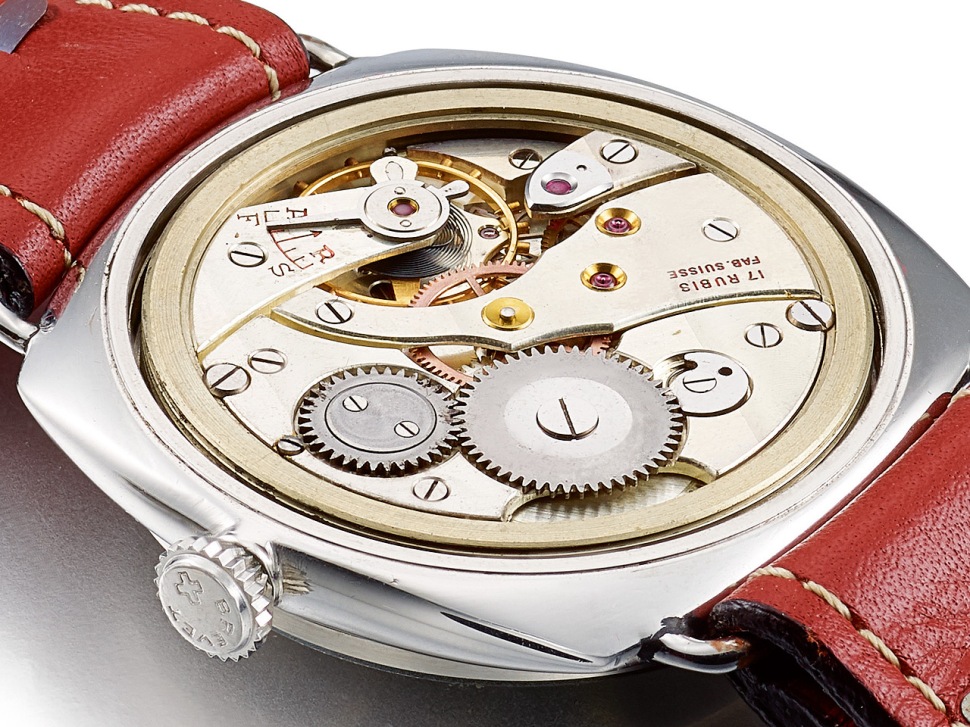 The wire lugs are in great shape too and the soldering appears to be original. The Rolex crown No. 11 looks like new.
.

The movement of this watch is a highly elaborated Cortebert 618 specifically made for Rolex. It features an overcoiled Breguet hairspring and a fully jeweled escapement wheel as commonly found on observatory grade calibers. Fully jeweled means that beside the regular two jewels, the wheel also has two cap stones, one on each side. 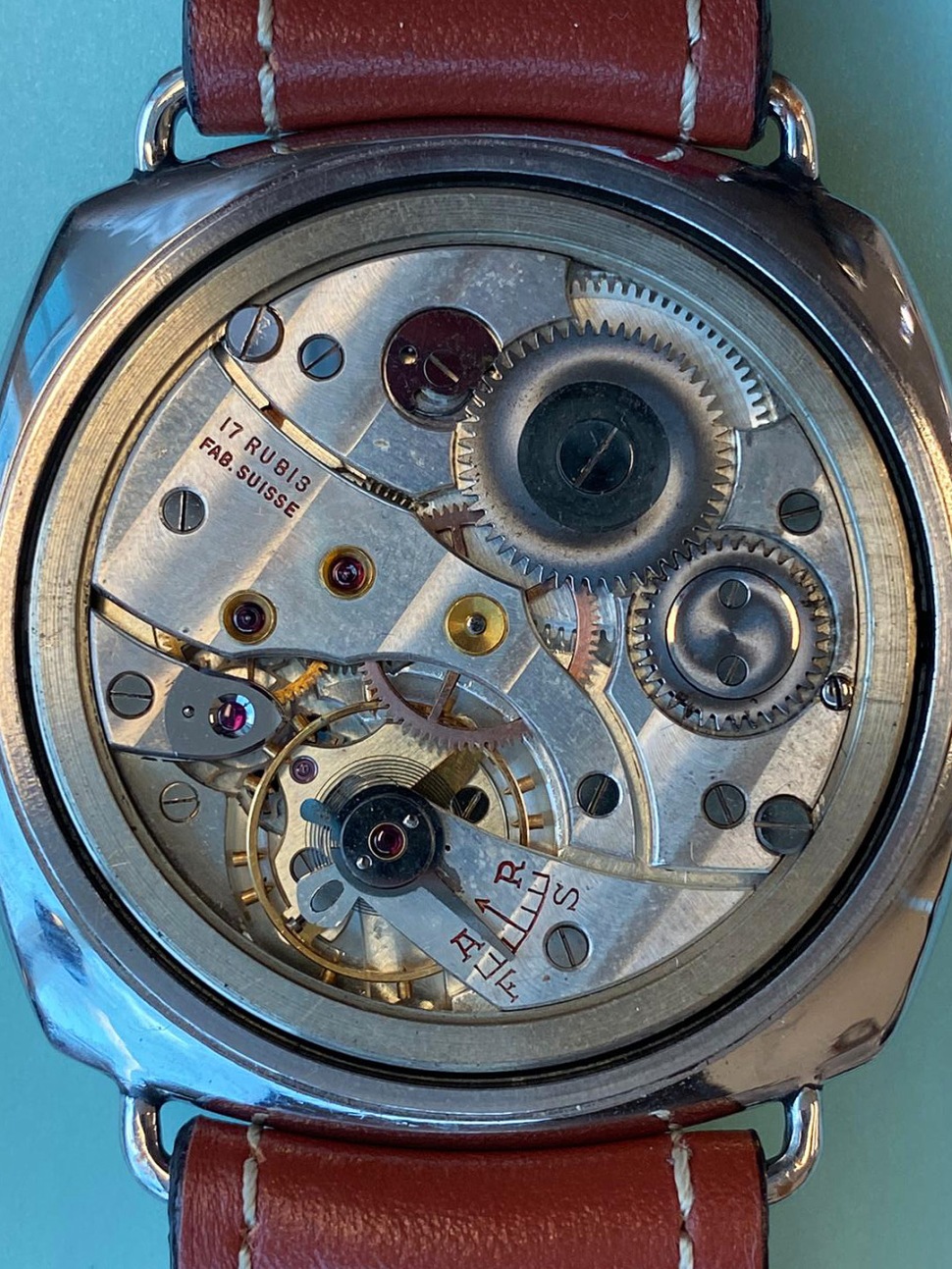 As mentioned above, the movements used in this last 3646 batch were completely anonymous and had no Rolex inscription. The train gear bridge just bears 17 Rubis – Fab. Suisse engravings.

The following comparison shows the difference between Rolex-branded movements and anonymous calibers. 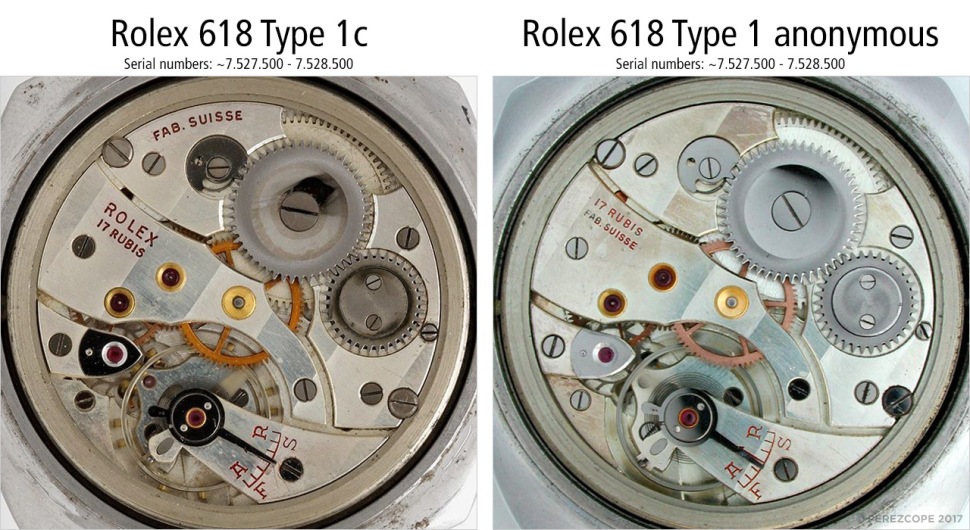 The condition of this movement is extremely good for a 75 year old watch. The plating has developed a little bit of patina but other than that, the movement appears almost untouched. The screws show light screwdriver marks which could be an indication the movement was serviced at least once. The setting lever screw (vis de tirette) and the area around it are very clean. This movement was not taken out of the case often.

The swirl finish on ratchet and crown wheel is well preserved. Beside some minor rust, which can be expected after 75 years, the wheels are in a superb condition.

The same can be said about the movement retaining ring. It looks like new. There are minor marks in the area around the casing screws which indicate that the movement was taken out at least once.
.

The inside of the caseback bears the typical Rolex stamp that was used for Rolex Oyster watches between 1938 and 1945. A closer look at the area on the right-hand side of the stamp reveals traces of a stamp that was removed. Brevetée and the A of Rolex S.A. are still legible. 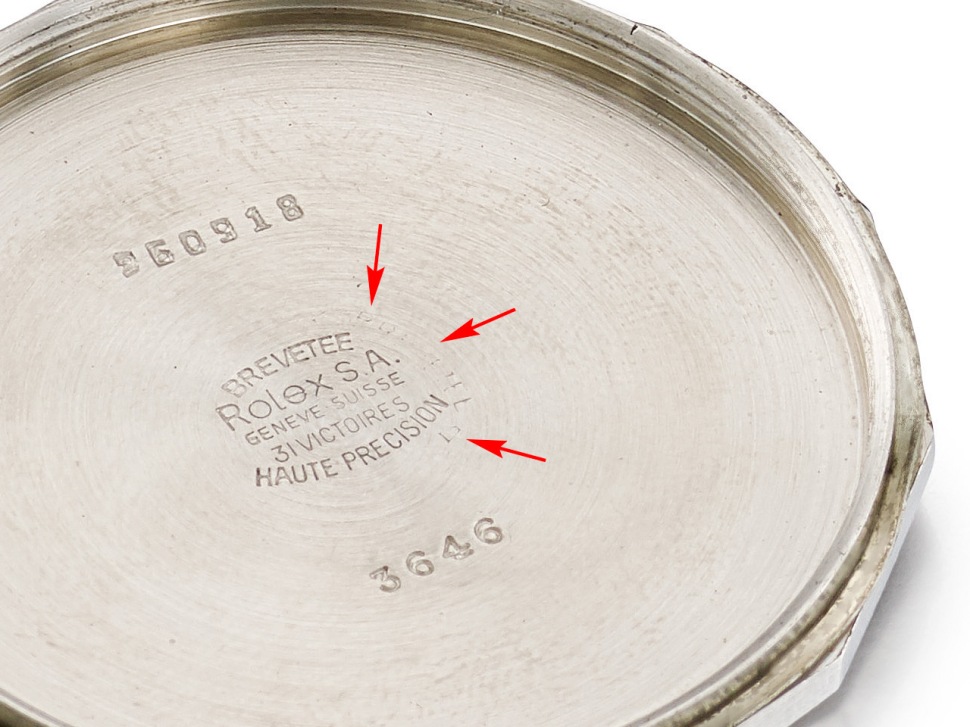 This is odd considering all watches in close case number proximity do not have Rolex stamps or – to be more precise – the stamps were removed. 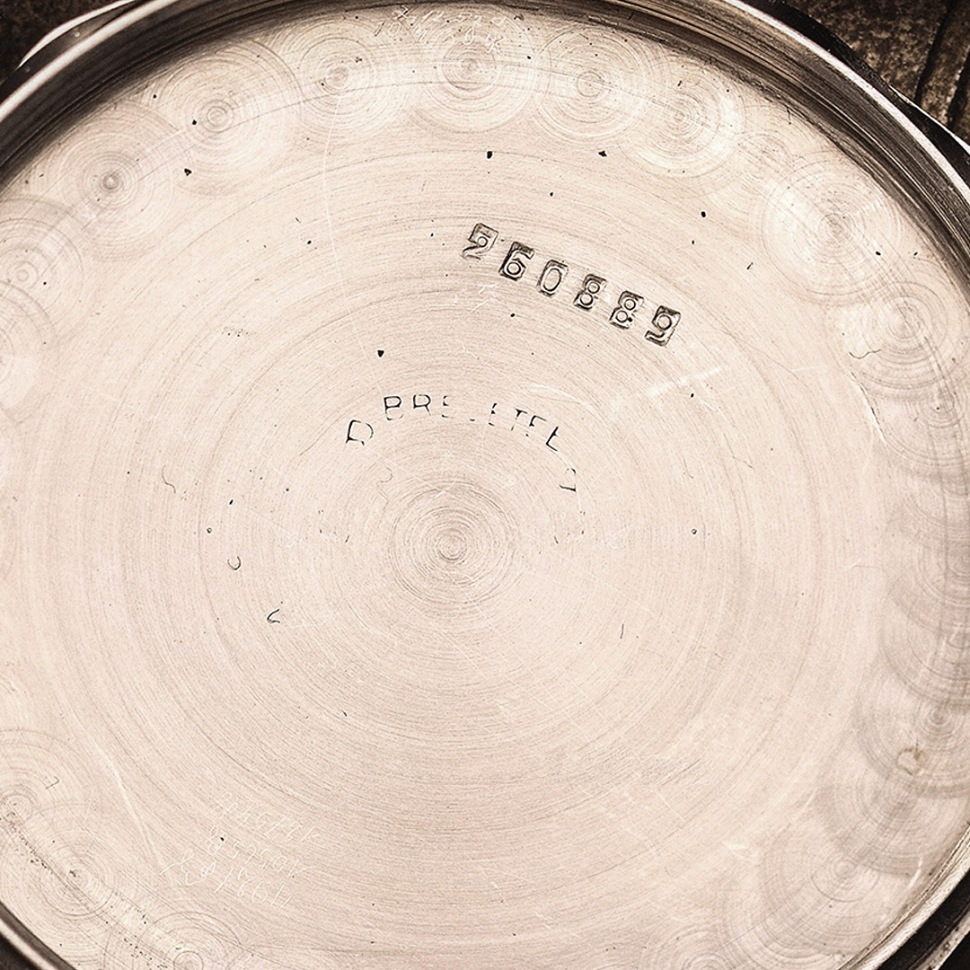 The next picture shows the same caseback with a superimposed Rolex stamp from a watch that retained the original stamp. The stamps match perfectly. This is a clear indication that the stamps were removed. The case numbers were subsequently restamped at a different position closer to the edge. 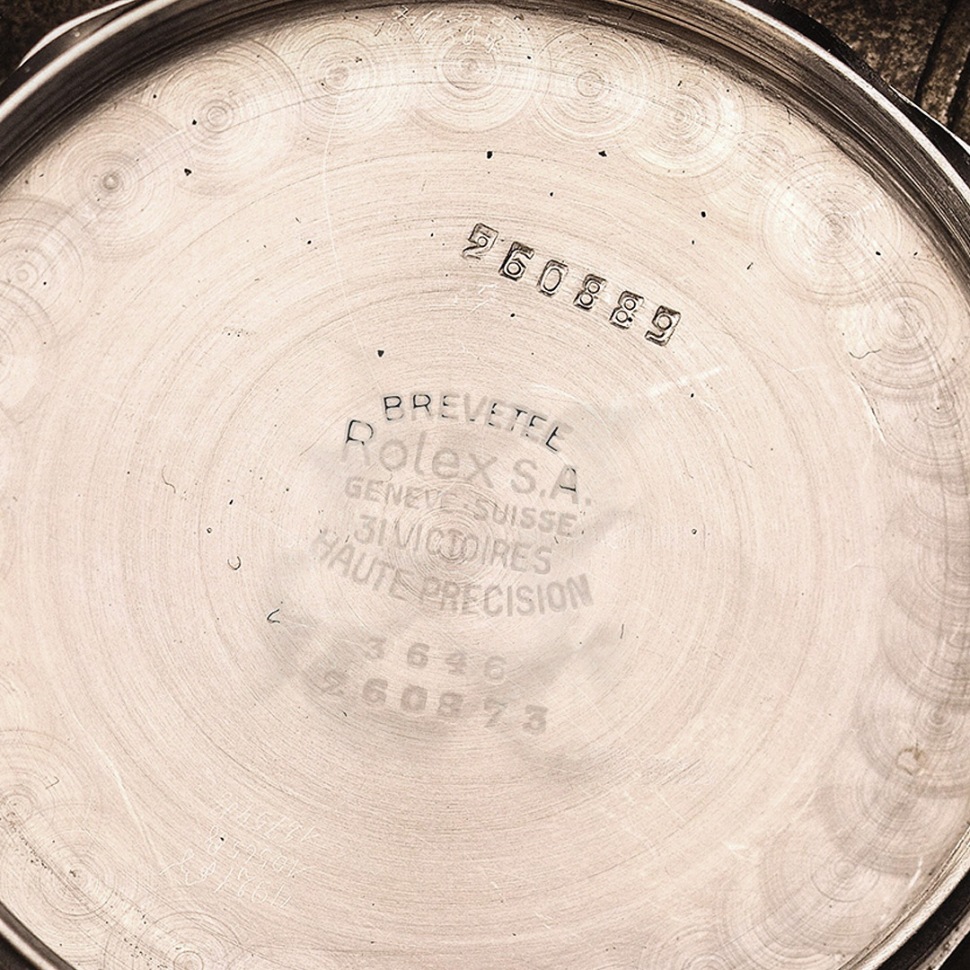 Why were these stamps removed? The timeline gives us a simple and logical answer. For some reason, Rolex was OK with supplying diving tool watches to the Italian Navy but as soon as Italy was occupied by the Nazis following the Italian surrender in Sept. 1943, Rolex’ attidude towards these watches changed dramatically. Hans Wilsdorf, the founder and owner of Rolex, was of German descent but had chosen to become a British citizen and in many ways became an Anglophile. His wife May Wilsdorf-Crotty was British. Rolex was founded in London and the British Empire was their biggest market.

In 1942, Hans Wilsdorf learned British Officers were being stripped of their valued watches when they were captured by the Germans. Wilsdorf managed to get in touch with the POWs through the Swiss Red Cross. He made an exceptional offer. The POWs could order a Rolex watch without having to think of payment during the war. Hundreds of orders were placed, and in many cases these watches played a crucial role in planning escapes from the camps (e.g. The Great Escape).

.
The picture below shows Hans Wilsdorf supervising his watchmakers during WW2. 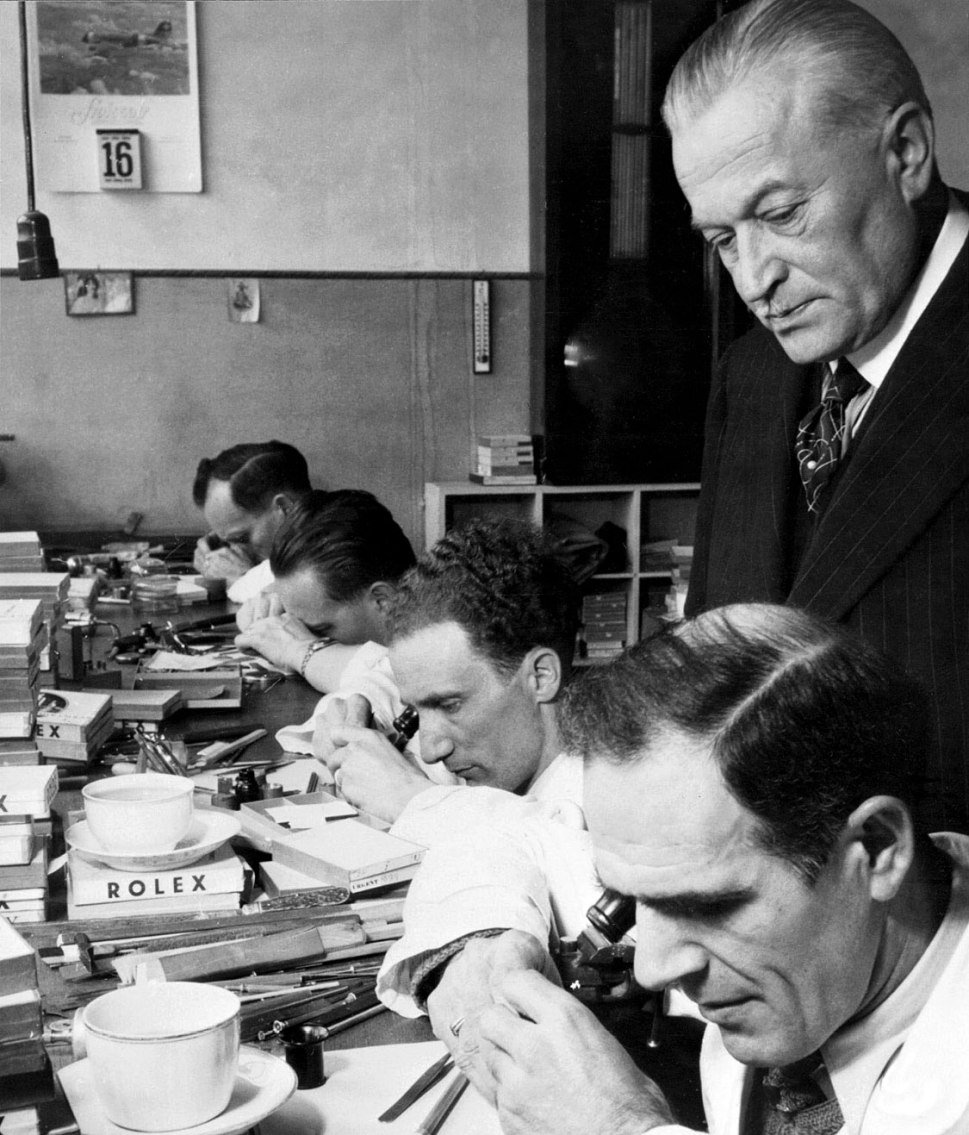 Rolex military watches in Nazi hands were Wilsdorf’s worst nightmare. Rolex’ reputation was at stake. Cutting the supply, on the other hand, would have put the Panerai family at risk. After numerous mass executions and massacres of entire villages, the Italian population lived in constant fear.

Wilsdorf, who was very loyal to his retailers, had to make sure Giuseppe Panerai was not seen as a saboteur to the interests of the Third Reich and had no other choice but to keep the supply going. To protect Rolex, Wilsdorf came up with a simple solution. Removing the Rolex stamps from the cases and placing a new order with Cortebert for completely anonymous movements. The new watches would be completely sterile.

It is interesting to note the stamp on the present watch is around 20% smaller than on earlier fully branded 3646 models. 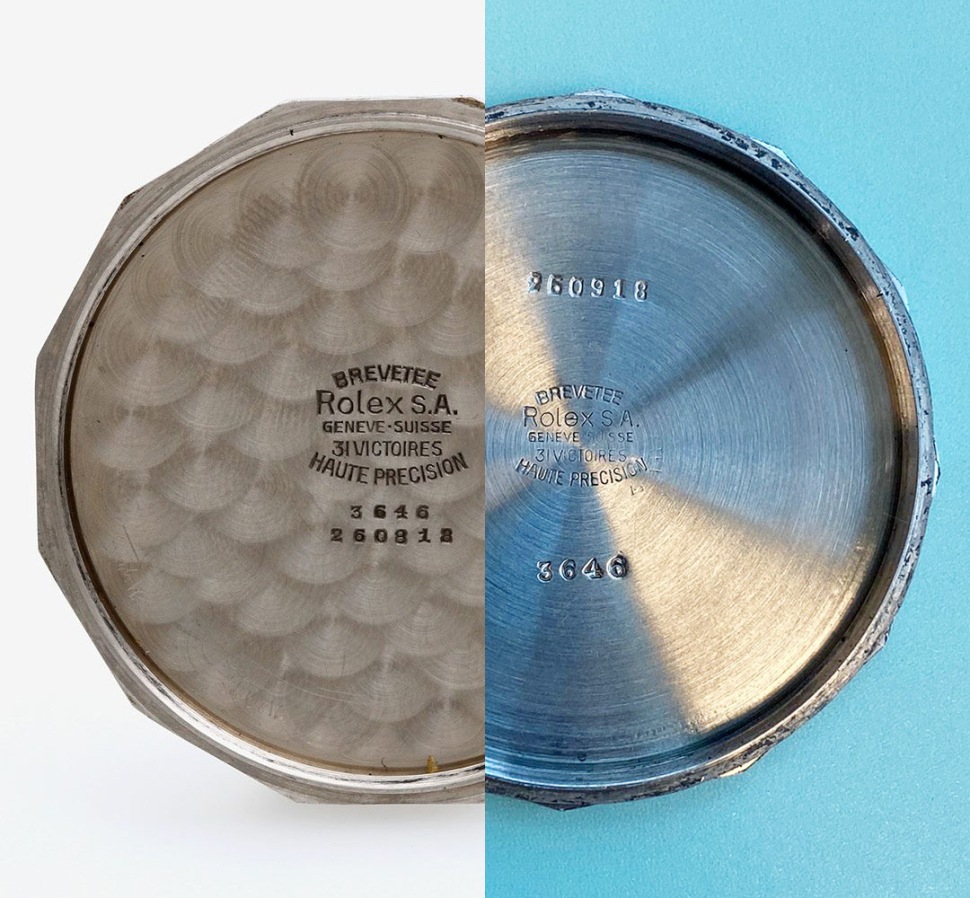 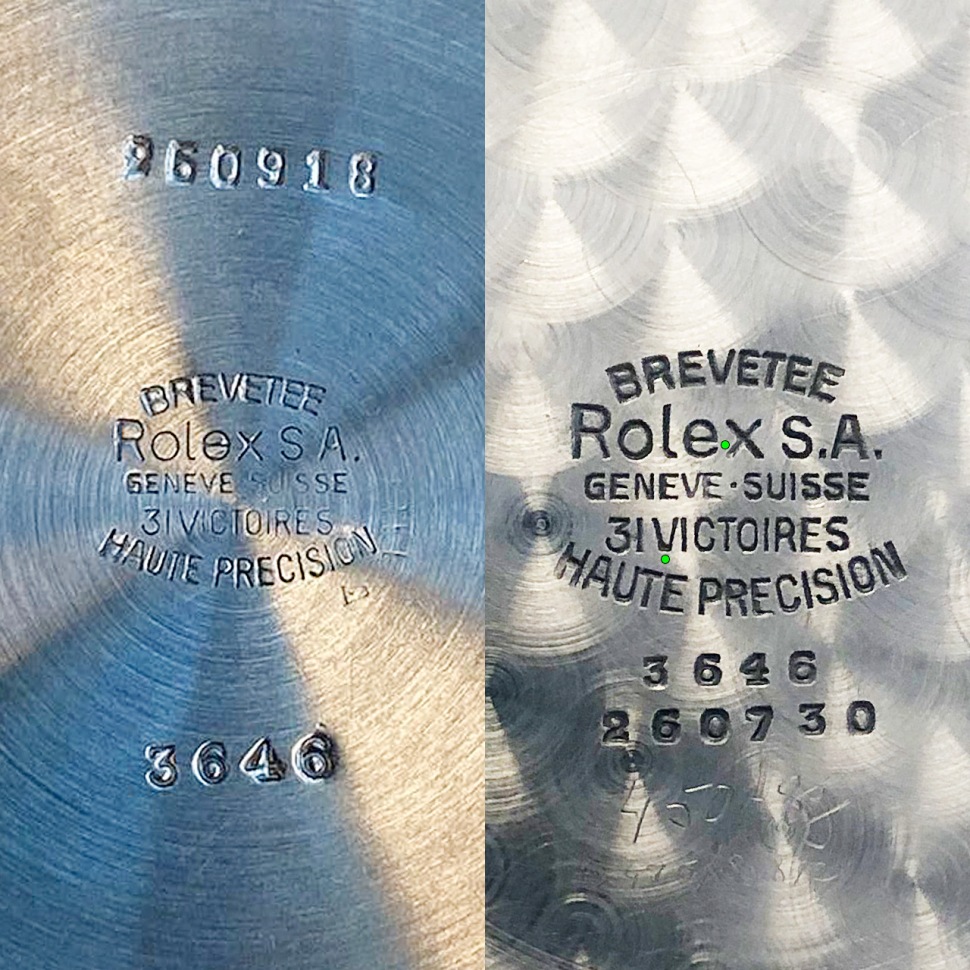 Another interesting detail to compare is the still visible A of Rolex S.A. The stamp on the left is – without shadow of a doubt – a fake stamp. The only original stamp on the present watch is the case number 260918. The reference number stamp is fake too and was only added to make the appearance complete.

On fully branded models, case and reference were punched in the same typeface whereas on the present watch, the reference number is punched in a considerably different typeface than the original case number.

As mentioned earlier, Rolex used this type of caseback stamp from 1938 to 1945. The picture below shows the exact same punch was used on other Rolex Oyster watches as well. Check the letter e in Rolex and the rest of the details. 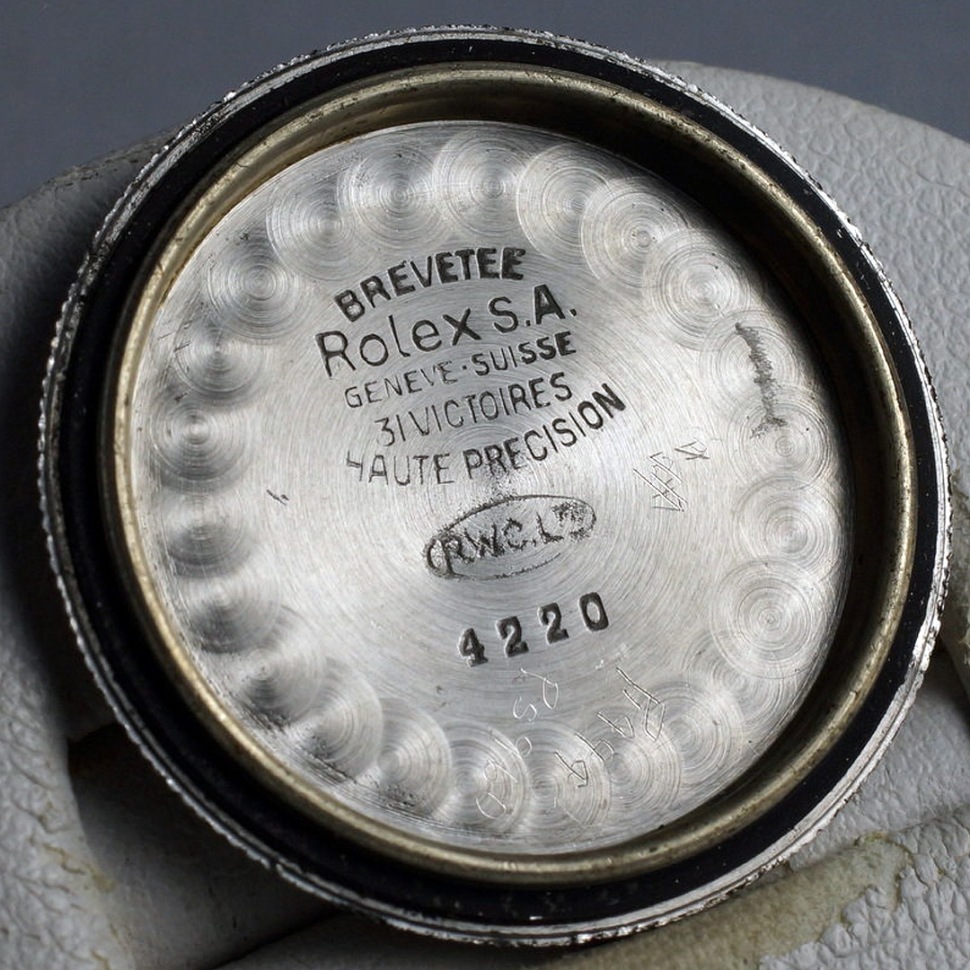 260918 is mentioned in Ehlers & Wiegmann’s 2016 edition of The References. Those books are loaded with Rinaldi fakes and other shenanigans.

Ehlers & Wiegmann divided Ref. 3646 into seven groups. Type A, B, C, D, E, F & G. Each group is solely defined by the style of the caseback. We can see the shortcomings of this system particularly in this example. 260918 has an almost identical caseback as 261109 and yet, the first belongs to Type E (anonymous watches) and the latter is a member of Type F.

A closer look at the stamps of 261109 (Type F) reveal similar issues as the present watch. Again, the e in Rolex has a wrong shape and the flat bottom of the V in Victoires is not as pronounced as on the original stamp. 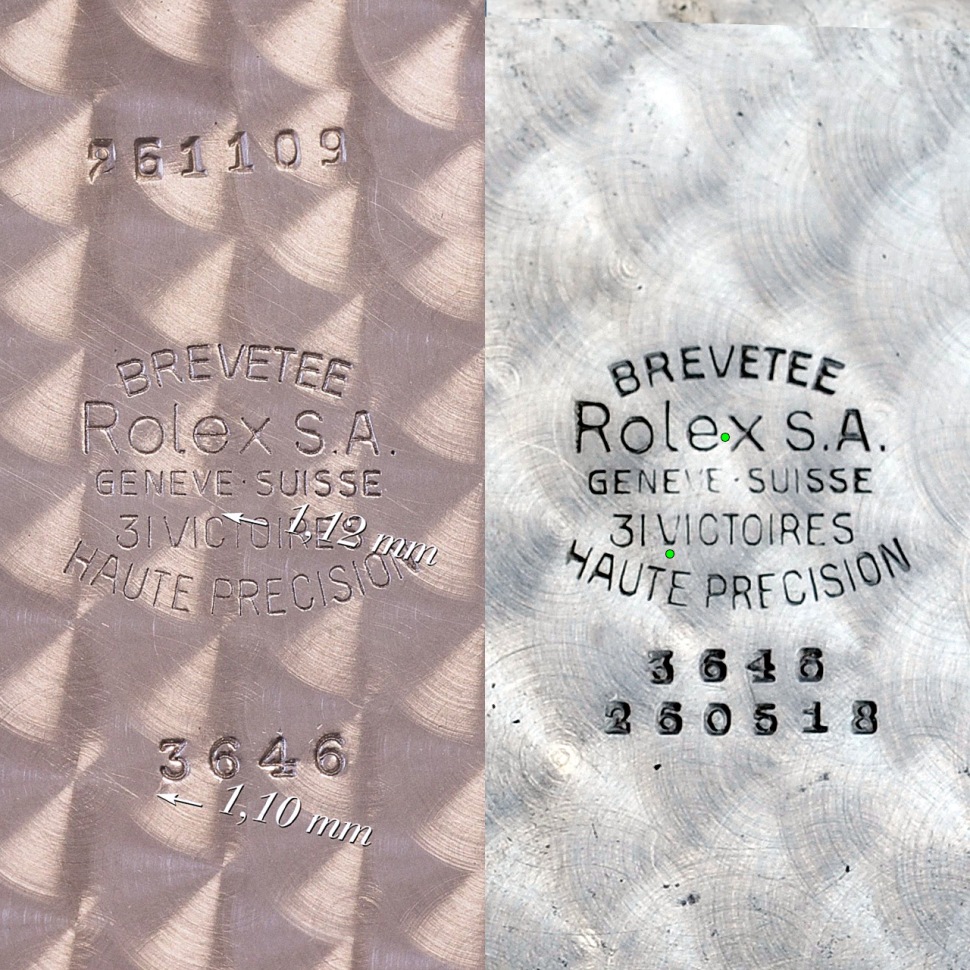 This is yet another fake stamp. Interestingly, 261109 is in a similarly great condition as 260918. This leads me to believe both watches belong to a lot of 20 to 30 Ref. 3646 watches featuring Error-Proof dials found in NOS condition at the old watch factory, Arturo Junghans SA, in Venice when the premises were transformed into lofts in the early 1990s. All of these watches ended up with Italian dealers.

The reason why these watches were in Venice in the first place is pretty simple. In July 1944, shortly before the Allied liberation of Florence, the Nazis raided the Panerai workshop and confiscated everything usefull, watches, instruments, machines, etc. The stolen goods were shipped to the Arturo Junghans watch factory in Venice. Venice remained in German hand until April 1945.

A 3646 with case number 261111 – which according to Ehlers & Wiegmann would belong to Type F – surfaced last year in heavily used condition in the United Kingdom. The picture below shows the completely anonymous caseback of that watch. 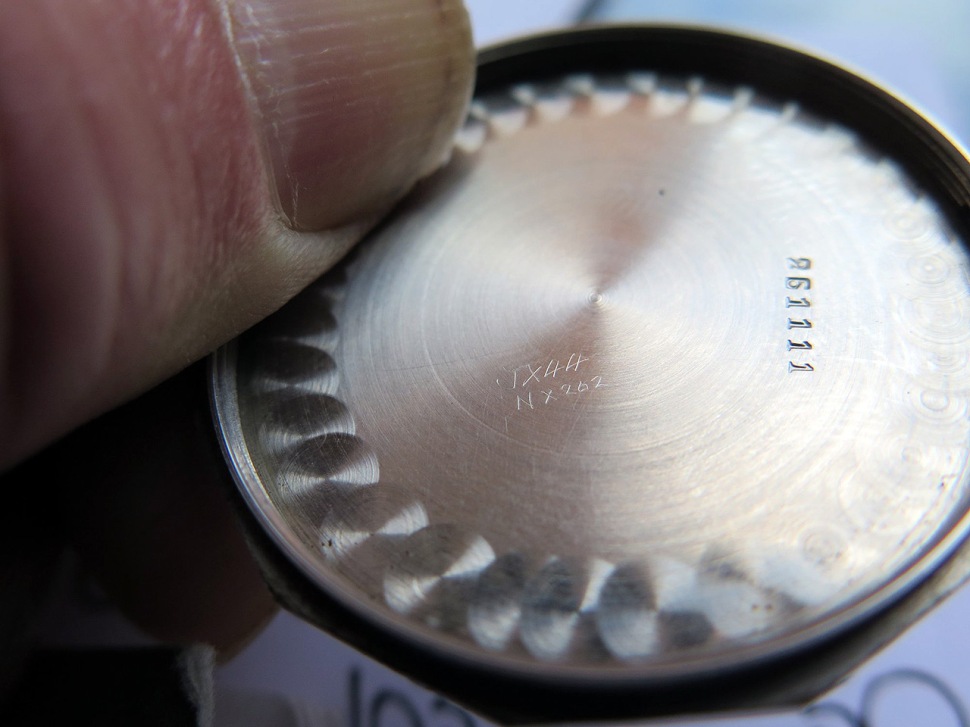 This proves the Type F group is total fugazi. Here is what happened. Since these watches were completely anonymous, the Rolex stamps were applied to sell the watches for a premium as Rolex.

If you would like to learn more about Rolex caseback stamps, I have created the following timeline which is available as a A2 (420 x 594 mm, 16.53 x 23.39 inches) high quality print for EUR 45.00 plus shipping. Please contact me to order. 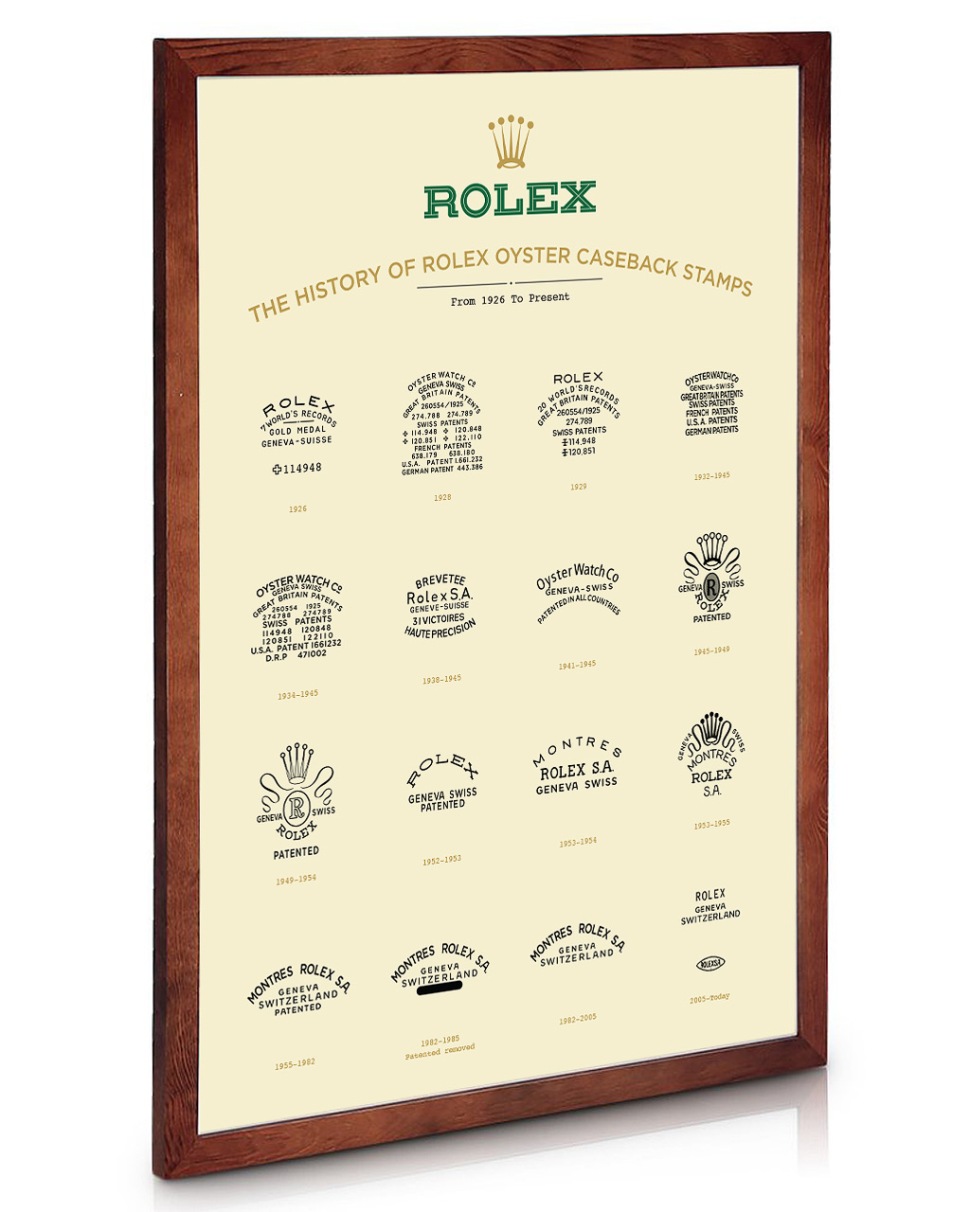 Just when you thought nothing could surprise you anymore you are presented with this incredible case. It is such a sad shame that an immaculate watch – an amazing piece of history that patiently waited for decades to be discovered – was ultimately manipulated and desecrated for profit. A Rolex branded watch will of course command a higher selling price than an unbranded watch.

How much damage this fake stamp caused will show in a few days. As said, apart from that, the watch is simply amazing and absolutely original. Sotheby’s was informed about these findings and will add the new information to the condition report.

On Oct. 8, Sotheby’s will be auctioning a second vintage Rolex Panerai, a 6152/1 with impressive Radiomir Panerai dial (Lot 2311). This 6152/1 comes with an official declaration from Mar. 10, 1958 which states the watch was privately acquired from Panerai through the Centro Subacqueo ed Incursori “Teseo Tesei” in La Spezia. 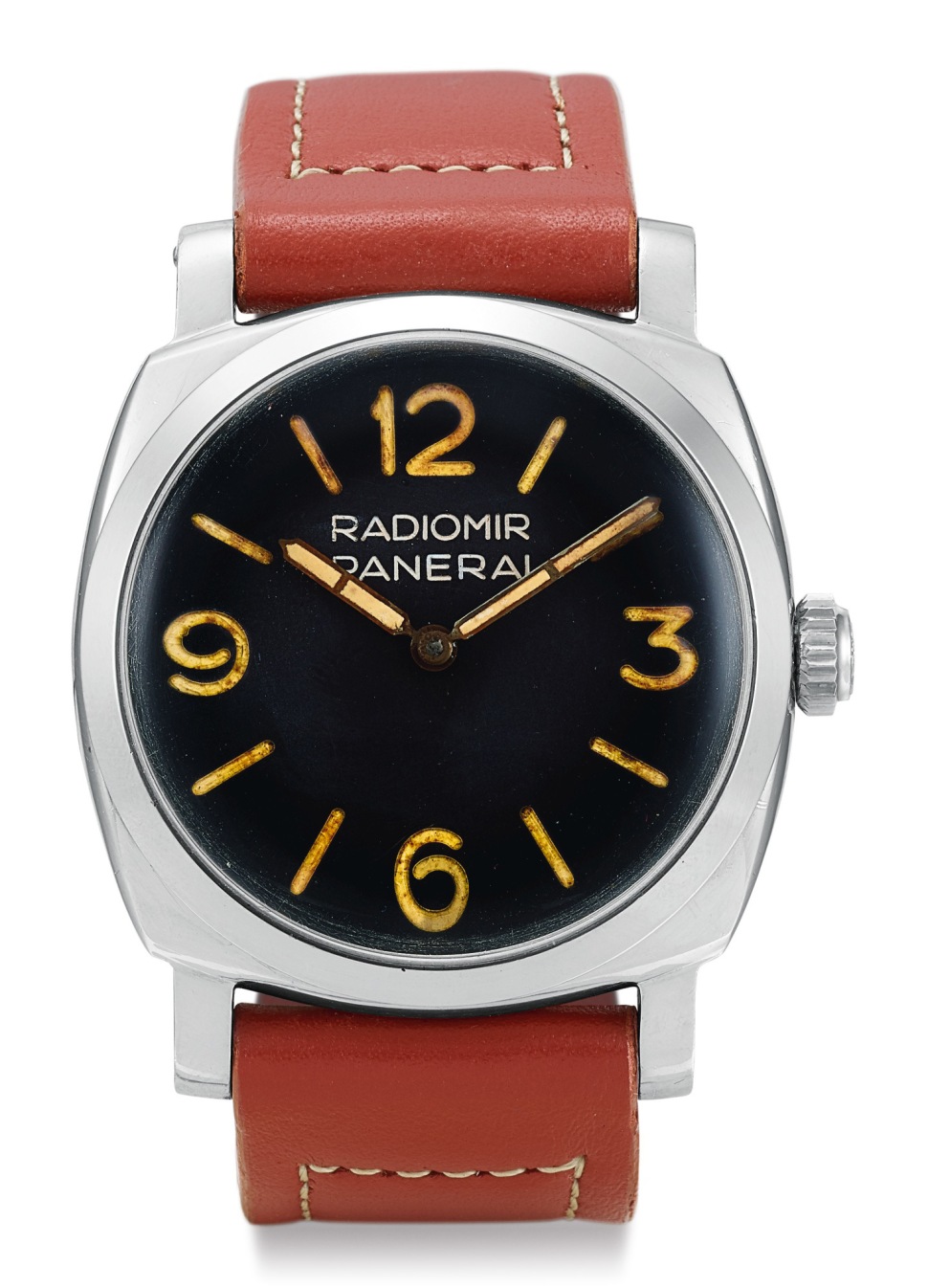 This watch is the perfect proof that Luminor, the tritium-based luminous compound, was not yet available in 1958. It is a historical fact that tritium became only available in large enough quantities after 1953 as a byproduct of the industrial production of thermonuclear weapons in the USA but it was not until the early 1960s that the Swiss watch industry adobted the isotope as a replacement for radium. Panerai introduced Luminor in the mid 1960s.

Thank you for your interest.
.

The Rolex Panerai 3646 with Error-Proof dial (California) is basically a Rolex Pre Submariner. The Error-Proof dial evolved over the course of time into the iconic Submariner dial. Please click the graphic to download the highres version. 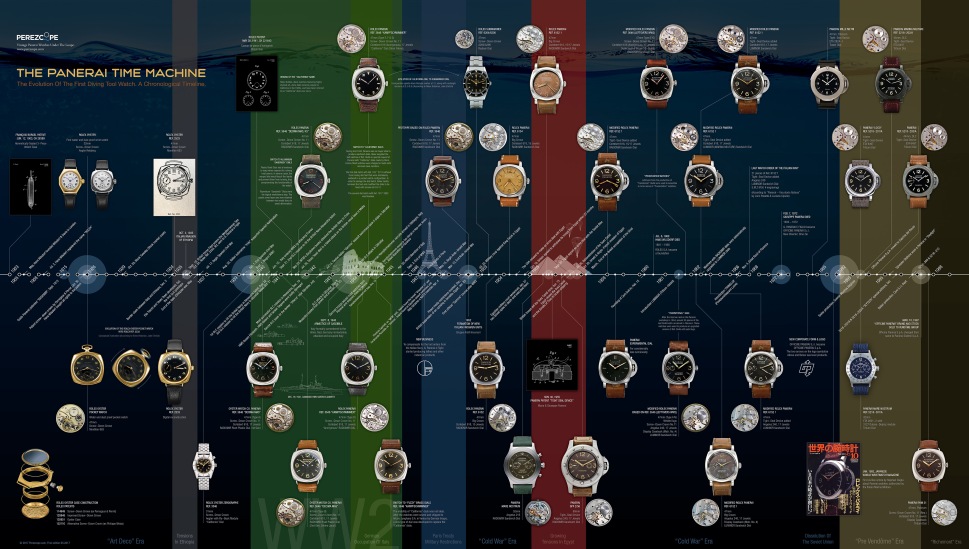 Printed with HD Inkjet on heavy synthetic paper and laminated.