The PAM 21 was the first Panerai Special Edition ever and was sold out within two weeks. The story goes that Angelo Bonati stumbled upon dozens of NOS (New Old Stock) Rolex 618 movements as he went through the inventory that had been passed on by the original Panerai company and immediately decided to create a faithful replica of the glorious Rolex 3646 used by the Italian Arditi Incursori (daring assault swimmers) during WW2. After scrutinising these movements “found in stock” in a typical Perezcope manner, I am left with serious doubts about their true provenance. There are massive inconsistencies compared to previous movements found in vintage Panerai watches.

The modern Officine Panerai, as it exists today, was born in March 1997. The original Florentine company was in financial trouble and was forced to sell its watch department to the Vendôme Luxury Group. The selling price for the brand name “Officine Panerai” and the whole watch stock, consisting of modern as well as vintage items, was an equivalent of 1 million Euro. In November 1997, the freshly established Officine Panerai was incorporated into the Richemont empire.

When Angelo Bonati, the CEO of Panerai, stumbled upon more than 60 Rolex Cal. 618 movements, he made the decision to replicate the glorious 3646, a watch designed and produced by Rolex for Panerai in several batches from 1940 until 1944.

The newly established Panerai company had no experience with original vintage Panerai watches. Included in the stock passed on by the original company were a total of six vintage Watches:

From this lot, the only watch with typical RADIOMIR PANERAI sandwich dial was the 3646 with dodecagonal (12-sided) bezel. This watch had been modified by the original Panerai company in the 1960s but for some reasons, the new company assumed this was a late 1930s prototype for “presentation’ purposes and equipped the PAM 21 with the very same Angelus style hands.

The display caseback of the PAM 21 is engraved with “Officine Panerai Brevettato” due to the same wrong assumption that the “prototype for presentation purposes’ was made in the late 1930s. The name “Officine Panerai” was only introduced in the mid 1950s.

However, the PAM 21 was a total success. All 61 pieces were sold within two weeks and the sale of this watches alone helped recover more than the expenditure made when purchasing Panerai. In an interview from July 2014, Angelo Bonati said:

In the stock, I found 60 brand new Rolex movements, and immediately, I replicated the Radomir using that mechanism. We sold it for 20,000 euros, which in 1998 was a lot, but it was sold out in 2 weeks.

In an interview with Revolution Magazine from Aug. 2016, Angelo Bonati said this:

What happened was, when we took over the brand, my team went to do an inventory of all our assets. They told me there was a box full of old movements and they were thinking of throwing them away. I told them to stop, jumped in my car and drove from Milan to Neuchâtel. I saw it was the full-bridge Rolex movement that was originally in the Radiomir. So I decided to create our first modern Radiomir watch with this vintage movement inside of it.

I received the precious insider information that Dino Zei, CEO of Officine Panerai until 1997, was not aware of the existence of these movements when talks with the Vendôme Luxury Group began. These movements surfaced during the very negociations and where apparently found in the Villino Panerai, the old premises of Officine Panerai. They were included in the inventory in order to increase the market value of the brand.

Let’s have a closer look at those movements found in stock. The Rolex Cal. 618 was made by Cortebert, a major Swiss watch company that disappeared as a result of the Quartz Crisis in the 1970s.

One thing that immediately draws the attention is the fact that the engravings are completely different than all other Rolex Cal. 618 movements used in vintage Panerai watches before. From a technical point of view, these units appear to be similar to Rolex 618 Type 4 used in the vintage reference 6152/1 from 1955 but a closer look reveals heavy inconsistencies. Another obvious deviation from previous movements is the prominent “Cal. 618” inscription on the barrel bridge.

As you can clearly see, there is no caliber number! Cortebert made an exception for Rolex and left all 16/17 ligne movements, used either for Rolex pocket watches or vintage Panerai watches, without any caliber denomination.

The Cal. 618 was not exclusive to Rolex. Cortebert produced this movement also for other companies. As usual for Cortebert movements, all other movements bear the caliber number “Cal. 618” on the barrel bridge.

The main difference between these two types lies in the pallet fork bridge which is located underneath the balance wheel. The first type (Type A) has the conventional bridge as used in all Cal. 618 found in vintage Panerai watches. The second type (Type B) has a L-shaped pallet fork bridge. These kind of bridge was introduced in 1956 and used in the last 3 series of Cortebert Cal. 616 movements found in Cortbert pocket watches.

The info graphic below is the result of documenting thousands of Cortebert and Rolex pocket watch movements. 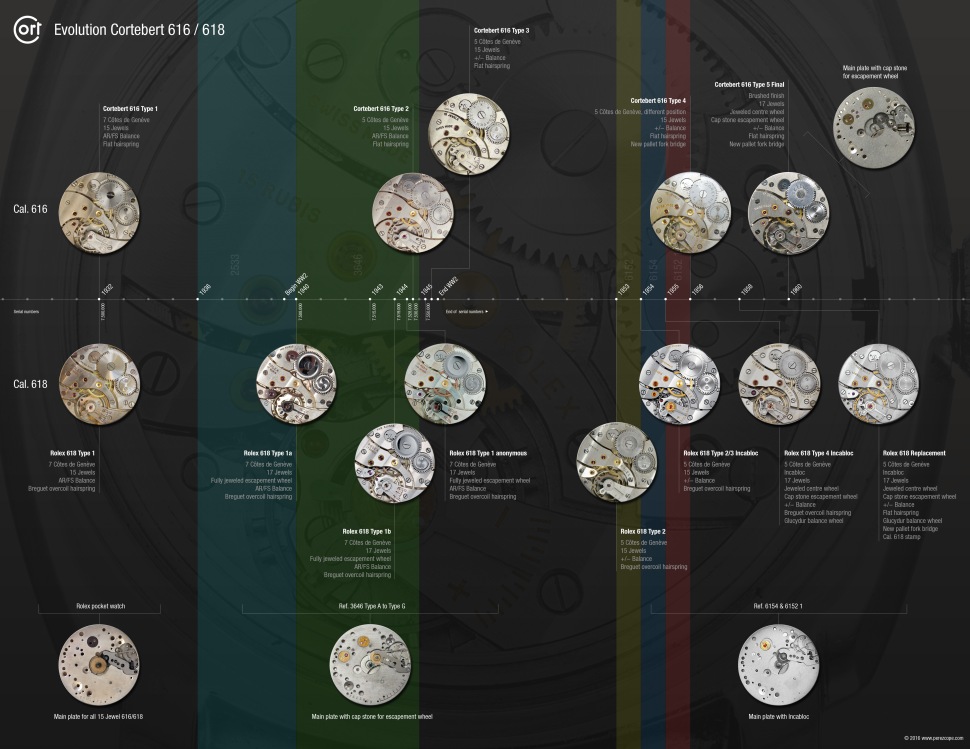 The finish of the base plates is slightly different as well.

I have never come across a Cortebert movement with a caliber denomination on the main plate. On the following picture you can clearly see the “618” engravings have a different finish than the original “Cort” stamp. These “618” engravings must have been applied by a third party.

As mentioned before, PAM 21 movements consist of two different types from different time periods. One type is pre 1956 and one type is post 1956.

The Cortebert Cal. 618 is basically the same caliber as Cal. 616, a movement which can be found in many Cortebert pocket watches from 1932 owards. The only difference between Cal 618 and Cal. 616 is the bridge design. Both calibers share the very same main plate, which has holes to take both bridge layouts. It is therefore very easy to swap bridges between these two calibers.

Since the small escapement bridge on Cal. 618 is curved in the opposite direction, it required holes at a different position. The image below shows the main plate of a Cortebert Cal. 616 featuring holes for both bridge configurations.

Cortebert installed a small cover plate (1) to hide the Cal. 616 escapement bridge holes on Cal. 618. Interestingly, none of the PAM 21 movements have this cover plate.

The following picture shows the small cover plate in detail. The Cal. 616 escapement bridge holes are clearly visible underneath the cover plate.

The next picture shows a Rolex Cal. 618 Type 4 movement with the escapement bridge from a Cal. 616. This is a perfect example to demonstrate how easily all bridges can be swapped between Cal. 618 and cal. 616.

Another obvious difference compared to Cal. 618s found in vintage Panerai watches is the regulator on the balance cock (1). PAM 21 movements have the very same regulator as Cal. 616 pocket watch movements, which was used exclusively in combination with a flat hairspring (3).

Within the same series, Cal. 616 and Cal. 618 (vintage Panerai) shared the same amount of Côtes de Genève (Geneva Stripes), always applied in the very same position, respectively direction. Rolex Cal. 618s were most certainly completely produced by Cortebert. The balance cock can be swapped between historically corresponding calibers and the Côtes de Genève will always match.

It is very interesting to see that the PAM 21 Cal. 618’s have Côtes de Genève which are a weird mix of older and newer series.

PAM 21 movements have a lot in common with standard Cortebert Cal. 616’s. The engravings are completely different than all movements before, the Côtes de Genève don’t match the regular Cortebert production and the caliber denomination on the barrel bridge is strange to say the least. None of the Rolex Cal. 618s found in vintage Panerai watches have a caliber stamp! To see even another caliber denomination on the main plate is bizarre. This somehow reminds me of regular production BMWs with M badges all over the place…

Having 2 significantly different types of movements also means different production dates. Years may lie between Type A and Type B.

Rolex Cal. 618s for vintage Panerai watches were highly elaborated movements with 17 Jewels and Breguet overcoil hairspring. The latter was also installed on simpler 618’s with only 15 Jewels which can be found on early 1950s Ref. 6152 and 6154.

We can only speculate about the provenance of these units. The fact that these movements surfaced during the very negociation process for the brand sale and helped increase the market value is quite interesting.

Perhaps Rolex bought leftovers from Cortebert and finished the mechanisms in their own factory in Biel. Why they felt the need to apply a caliber denomination is a riddle…

The PAM 21 is a milestone in Panerai’s history and is included in The Panerai Time Machine as a bridge between old and new. Please click the following  graphic to download the highres version.