Christie’s in Geneva will be auctioning two interesting vintage Panerai 3646 watches on May 16, 2016. Lot 134 is a typical 3646 Type D with anonymous “Kampfschwimmer” dial. Lot 135 is a 3646 Type C with “Radiomir Panerai” dial and sought after “Decima Flottiglia MAS” (MAS = Mezzi D’Assalto) matriculation number. The latter is a familiar face, it was auctioned by Christie’s in New York in December 2013 and fetched USD 161.000. Let us have a look at this one first.

The special feature of this watch is definitely the “Xa. FLOTMAS No. 048” matriculation number engraved on the case back. Only few watches bear this type of numbers. The watch is powered by a Rolex 618 movement with 17 Jewels.

(The link does not work anymore. For some reason, Christie’s has deleted this lot from their database.)

At first glance the face of this particular watch appears to be a typical “Radiomir Panerai” sandwich dial as seen on most 3646 Type C. Something that immediatly catches the eye is that the number 12 seems to be misaligned. Christie’s says:

“The attentive observer will immediately notice the positioning of the number 12, not properly aligned in a 90 degree angle but slightly tilted to the left side. Interestingly, this phenomena can also be detected with the watch’s peers, Xa Flotmas No. 043 and No. 040, prominently illustrated in Guido Panerai & Figlio by Loris Pasetto and Luciano Cipullo, Limited Edition, 2013, pp. 72 & 73: the number 12 of the first also tilted to the left side whereas number 12 of the second example evidently leans to the right.”

The problem with this dial is not a slightly tilted 12. It becomes obvious in the next picture that the engravings are totally crooked. The whole dial has been turned within the watch in order to align the “Radiomir Panerai” inscription properly. In consequence, all indices and markers are misaligned. 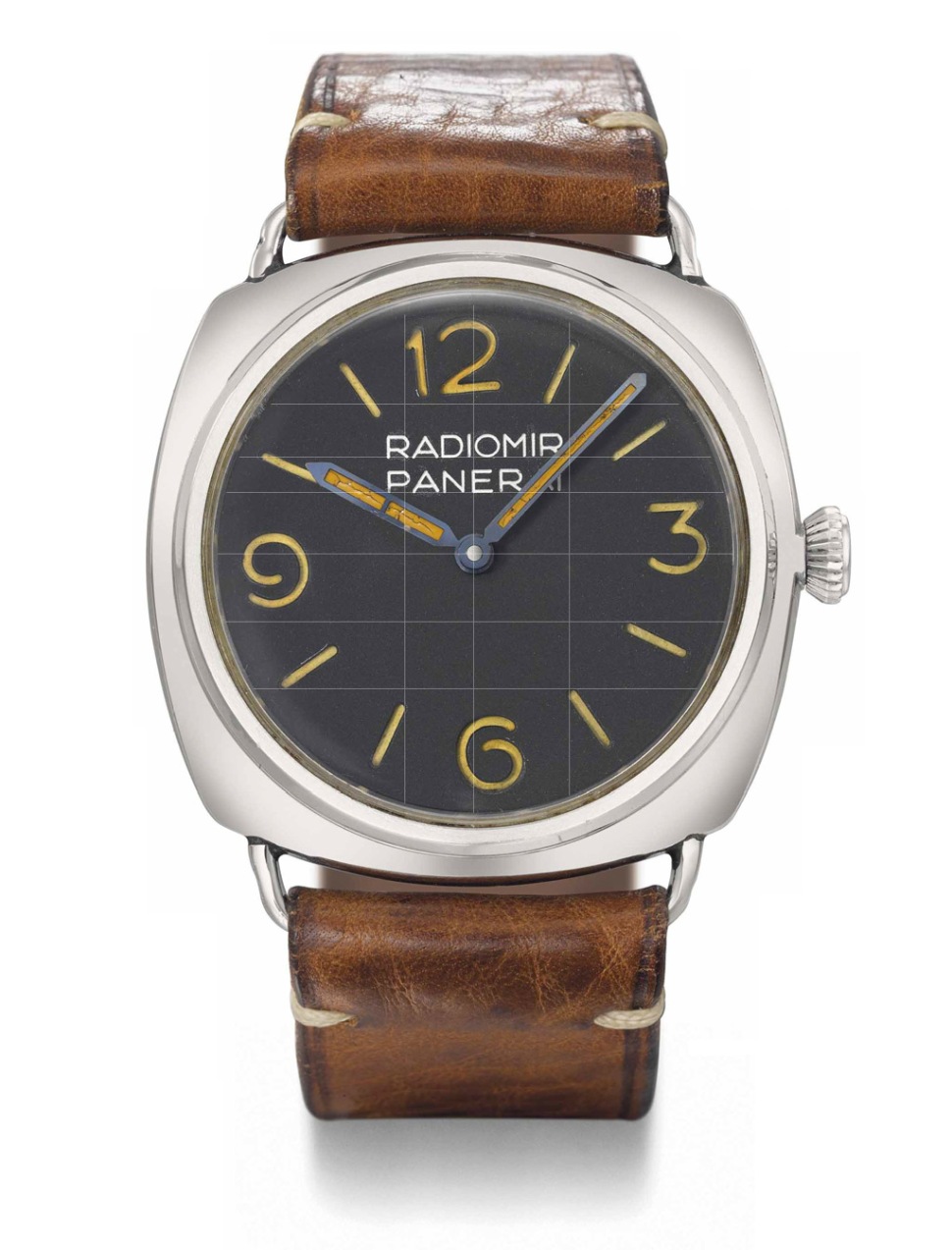 The next picture shows how the same dial would look like if the indices were properly aligned. Whoever installed this did a great job to distract from the messed up dial. Usually these dials have soldered dial feet to attach them to the movement and align them properly. It would be interesting to see how the backplate of this dial has been modified for the new alignment. 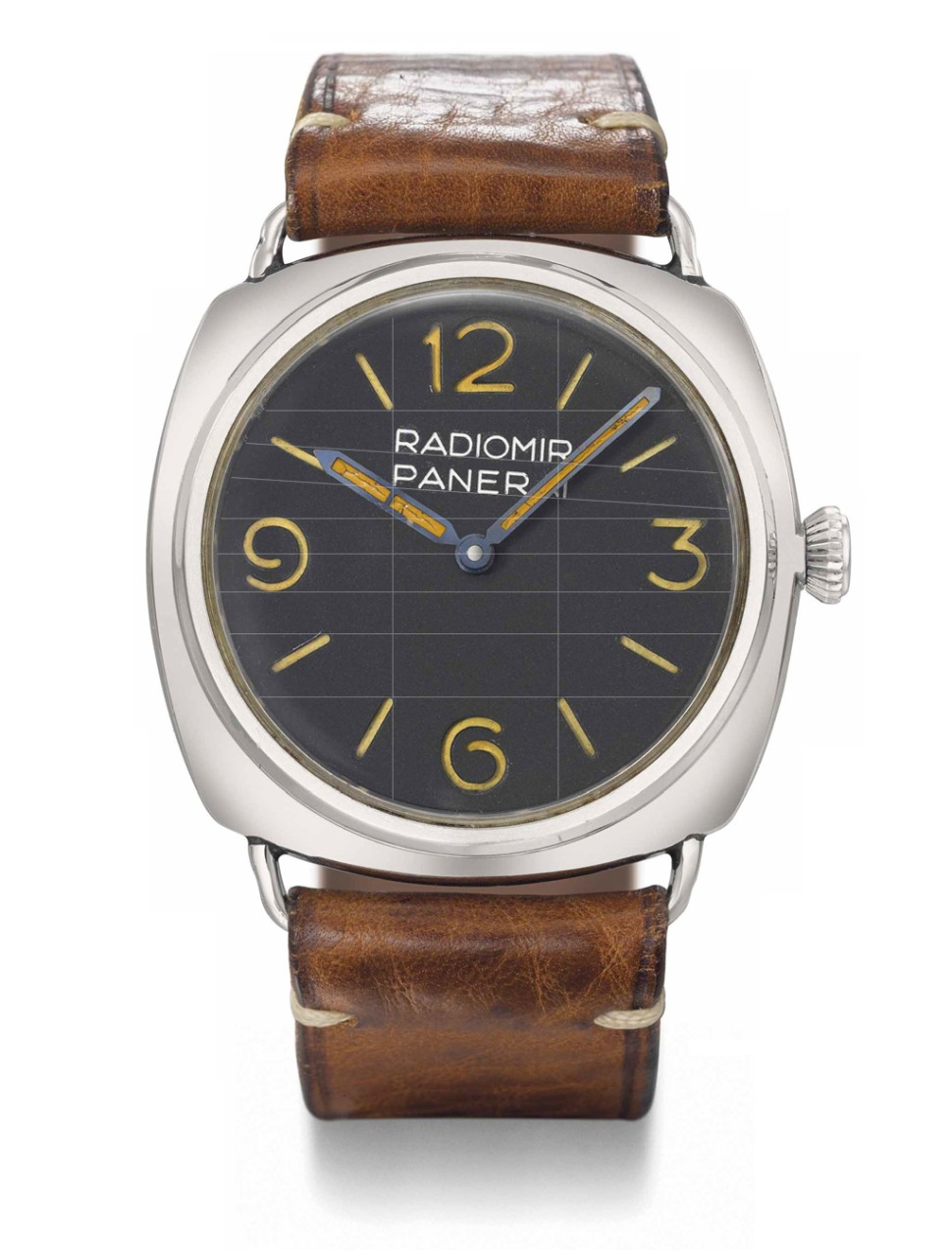 Another detail that catches the eye is the different patina of the indices and markers compared to more common 3646 Type C dials. I believe original Type C dials turned to a dark red over time. On the following picture it also becomes pretty obvious that the indices 6 and 9 have a slightly different shape.

The “Radiomir Panerai” inscription was added at some point. In my opinion these engravings were not executed by G. Panerai e Figlio. Poor quality like this would not have passed the quality check.

The follwing comparison shows more differences. The engravings are not only crooked, the letter “R” has also a wrong shape. The very same “R” can be found on several manipulated dials, it is like a signature. I came across the information that in the early 1990s two people were able to extract around 600 dials (rejects, used and discarded), along with other materials from Officine Panerai S.p.A. in Florence. According to my information, Vendôme was offered the chance to buy over those dials in 1998 but the deal was never concluded.

However, this type of engravings were originally executed with pantograph machines. Italians used to be cracks in this discipline. It requires a lot of experience to create perfect engravings. In order to make a perfect “R” the operator probably engraved first the letter “P” and then added the leg to conclude the letter. The person who engraved this faulty dial had probably no idea how the old masters used to work. 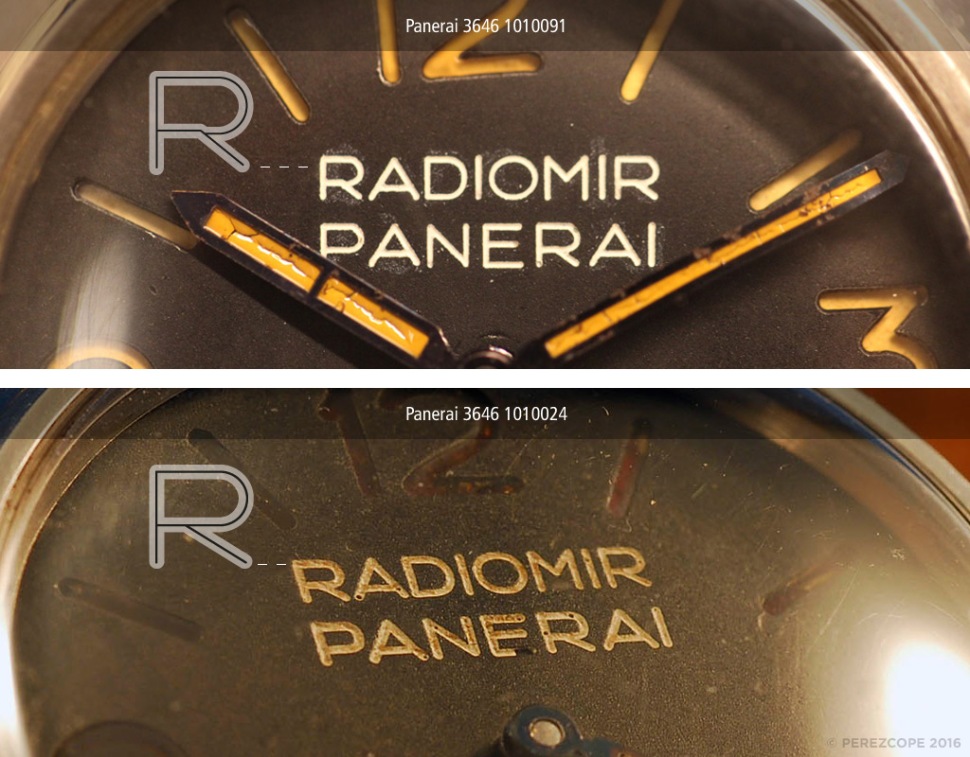 The engravings in question have been filled with wax. The excess of wax was wiped off with a cloth, which left some marks behind.

Christie’s claims that “Xa. FLOTMAS No. 040” and “Xa. FLOTMAS No. 043” have similar issues with the dial. In my opinion the dials of both, 040 and 043 are beyond any doubt and cannot be compared to the one in question. Both dials have indices and markers which turned to dark red and the engravings are properly executed and aligned.

The following picture shows the special feature of this watch, the Decima Flottiglia MAS matriculation number “Xa. FLOTMAS No. 048”. A total of five 3646 Type C watches with this kind of matriculation are documented in my database.

1010091 has the correct Rolex 618 Type 1a caliber for a Type C. The Rolex engravings follow the upper curve of the train bridge whereas on later movements they are completely straight. The movement ring is made of brass and has the corresponding color, another characteristic of Type A to C watches.

More about the movements used in vintage Panerai watches

Overall a very interesting and rare watch, especially the matriculation number. However, the dial is really bad. The face of a watch is without doubt the most important feature and having to look at such a mess kills it for me.

The next watch is a typical 3646 Type D Kampfschwimmer with completely anonymous dial with the distictive “open” 6 and 9. Type D watches were specifically produced for Nazi combat swimmers after the occupation of Italy. Read the story about how a vast numbers of Panerai watches ended up with the Nazis here.

The movement is declared as Rolex 618 with 17 Jewels.

The movement of this watch is the correct Rolex 618 Type 1b (straight Rolex engravings). The bridges appear to have been cleaned at some point since the red filling color of the engravings is gone. The “gold” color is actually the brass material. The engravings were usually applied after the bridges had been plated.

More about the movements used in vintage Panerai watches

Not much to say about this watch. The dial has a nice patina and hands, case and crown appear to be in a good condition. Movement and movement retaining ring with silver color are correct for Type D. This watch is new to the market and was not registered in my database before.